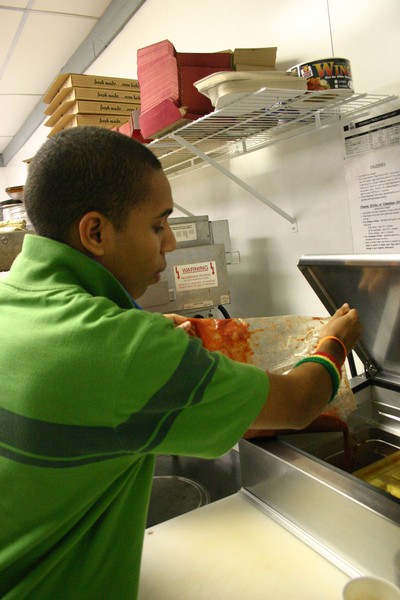 The Storm Cellar is close to breaking even this month, according to Tom Schmidt, assistant professor of management and adviser of Students in Free Enterprise.

“Statistics say it takes about three years for a restaurant to turn a profit and we are going to come real close to it this month,” Schmidt said.

The Storm Cellar, a free standing corporation that operates under the management of SIFE members, opened in April 2004 and originally planned to turn a profit within the first year of business.

Schmidt said although the Storm Cellar didn’t have to recover lost capitol because of money from outside enterprise investments, it did overestimate the market and therefore hasn’t yet been profitable.

To earn more money, the Storm Cellar implemented a delivery service the weekends of Feb. 4-6 and Feb. 12-14, but it was cancelled due to lack of business.

“It wasn’t promoted well,” said junior Rachel Haaland, Storm Cellar manager. “It wasn’t worth what we were putting into it.”

The Storm Cellar hasn’t been doing as much business as it would like during the weekdays it’s open.

This slowness has irritated some.

Junior Kristy Hirsch took her friend from the “Best Buddy” program to the Storm Cellar one weekday afternoon in January.

However, the Storm Cellar has turned into a popular late-night hangout on Thursday through Saturday. About 100 people come in after 1 a.m. on weekends according to Haaland.

“It is usually a good to place to go after Signatures closes,” freshman Zach Rus said. “The food is good and cheap. They get me my food right away.”

“The ‘bar crowd’ is actually fun,” Haaland said. “They make [the Storm Cellar] have life. Sometimes it seems a little out of control – but in a good way. There is a lot of excitement then.”

The Storm Cellar is going to do more research on its target audience and implement price changes next month.

“The prices are really low right now,” Haaland said. “The margins are low, so we aren’t making very much. We are going to raise the margins so prices will go up next month.”

Representatives of SIFE recently went to the Student Government Association to ask for funding for a trip to the SIFE regional competition in Minnesota, uniform shirts for the competition and a computer.

SIFE was given $1,212.40 for uniforms and part of the competition but not for transportation and the computer.

“We aren’t a line item organization,” Schmidt said. “We aren’t like the radio station or RLC who get a regular budget each year. We need to get on that.”