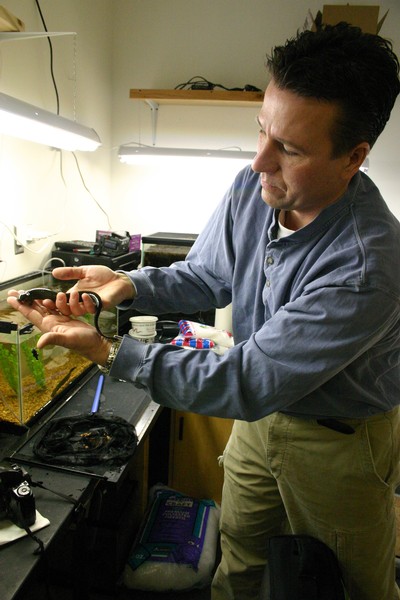 The sexual habits of salamanders are compelling two biology students and their professor to begin a detailed study.

This spring, Jeff Parmelee, associate professor of biology, and sophomores Shawna Baker and Allison Cherry are attempting to observe the mating habits of a salamander species known as the Lesser Siren.

“No one has ever observed their mating habits,” Parmelee said. “It’s probably because they’re nocturnal or they do it under the mud.”

Parmelee, Baker and Cherry are using videotape technology in hopes of viewing the mating rituals of the Sirens.

“We’ve placed females and males together and hope to capture their mating behavior,” Baker said.

Baker credits Cherry with the development of the Siren experiment.

“It was Allison Cherry who actually designed this experiment using multiple tanks and cameras to keep constant surveillance on the Sirens at all times,” Baker said.

The Sirens will receive 12 hours of light and 12 hours of dark each day. Their every move is being taped using cameras and four videocassette recorders ready to record in succession.

“Once we start recording, Shawna Baker and I will view all the tapes, paying close attention to any behavior that we think has significance,” Cherry said.

The study of reptiles and amphibians is known as herpetology. In a $4,082 grant proposal for further experimentation with Sirens, Parmelee said several social observations have been made so far.

Ensuring that the Sirens are comfortable in captivity is helpful in encouraging them to mate.

“Setting the tanks up so they could survive and be comfortable was the first job,” Parmelee said.

Parmelee, Baker and Cherry all contribute to the effort to keep the salamanders comfortable.

“I also feed the Sirens … every other day and we switch off on changing 25 percent of the water weekly,” Cherry said.

According to Parmelee, Sirens mate during the months of February and March. Parmelee is confident the Sirens will reproduce while they are on campus.

“It’s only a matter of time before the females lay eggs,” Parmelee said.

Cherry is optimistic about the success their experiments could have over several years.

“Many spring semesters might pass before their behavior is observed, or we might get lucky and see it this semester,” Cherry said.

The technology involved in the Siren experiments could be vastly improved if Parmelee’s grant proposal is approved in April.

“I am working to set up a camera connected to the Internet, a ‘salamander cam,’ which will broadcast live images of a pair of these elusive creatures,” Parmelee said.