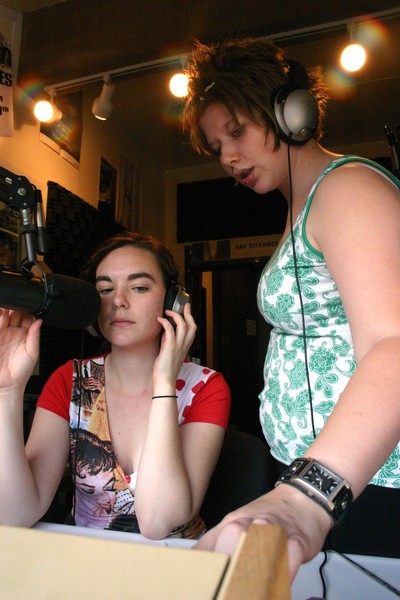 KSTM prides itself on being a station where college students can turn for the latest from indie bands and the underground music scene.

“We like to keep to independent bands and music you don’t normally hear on mainstream radio,” junior Grant Carlson said.

Carlson is the music director at KSTM, a position he’s held since second semester of last year. He has been a disc jockey since his freshman year.

Carlson said it all started on a visit to campus during the summer before his freshman year when the KSTM booth caught his eye and he talked to the director.

“During the second semester of my freshman year, I interviewed for the music director position, but I didn’t get it at first,” Carlson said. “I interviewed again and eventually got the position.”

“It’s my job to go through all the materials and put the songs on the computer for the DJs to play, but they can play whatever they want,” Carlson said.

One of the new faces to KSTM this year is sophomore Bethany Hanson. Although Hanson is new to KSTM, she isn’t new to the DJ game.

“I was a DJ in high school and it was a lot of fun so I wanted to do it again,” Hanson said. “I also wanted to get involved in another area on campus and broaden my musical horizons.”

There are a wide variety of shows being offered this semester including some specializing in indie rock and Scandinavian metal.

“I did a talk show last year and plan on doing it again this year,” junior Sarah Harriman said.

Harriman has been a DJ at KSTM for two years and last year she was the productions promotions manager.

“It sparked my interest because I listened to a lot of underground music,” Harriman said. “I went to the meeting and was inspired by Sara Neppl, who was the director at the time.”

This year Harriman has taken on a new role as the program director.

“As director, I handle all of the DJ relations and organize the studio and the office,” Harriman said. “I also do the promotions this year and take care of any problems.”

Working with old equipment is a problem for KSTM.

“The computer is pretty old and has given us some issues in the past,” Harriman said. “Most of the equipment has been reliable so far, but we’re getting a new computer this year.”

In addition to new equipment, the staff plans on trying some new things this year.

Carlson plans on coming in from 7-8 p.m. on Wednesday nights to play some of the new music the station constantly receives.

“That’s something we haven’t done in the past,” Carlson said.

KSTM did a program called Rock Reels last year, screening music-related movies in Camp Lounge including “This is Spinal Tap.”

The station has also hosted bands such as Troubled Hubble to perform concerts.

According to Harriman, there’s even a possibility of featuring guest shows where professors can buddy up with a DJ to learn what KSTM is all about.

Harriman said there are about 24 students who have shown an interest in becoming a DJ this semester and about half of them are new to KSTM.

Hanson looks forward to the opportunity.

“I like to listen to a lot of different things,” Hanson said. “This will be a good place to sit down and decide what I like.”