Hurricane relief efforts at Simpson raise more than $3,600 for victims 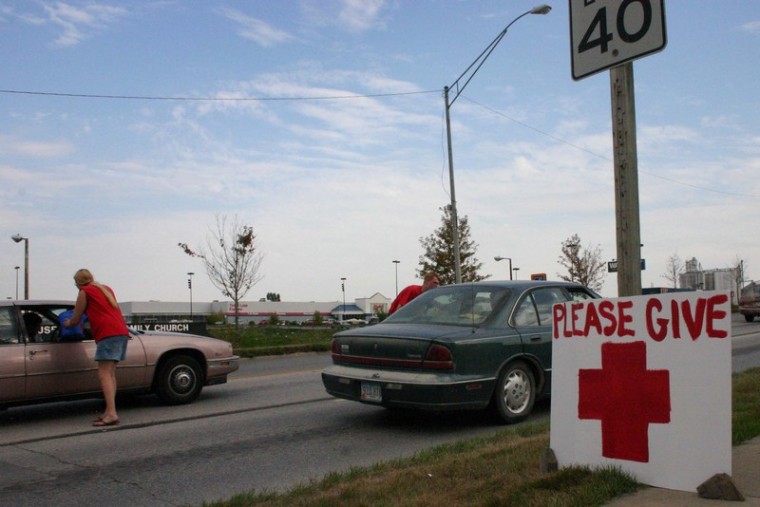 Hurricane reliefSimpson has not only opened its wallets for the victims of Hurricane Katrina – it’s also opened its doors.

Sona Sylve, a freshman from Dillard University of New Orleans, is attending Simpson until Dillard can resume classes.

Walter Lain, assistant dean for multicultural and international affairs, said the offer for students from the affected area to come to Simpson is still on the table.

“Their immediate future is uncertain,” Lain said. “Simpson has opened its doors to them and we should welcome them, understand their hardships and show that Iowa hospitality.”

Funds for Sylve’s books, flight to Iowa and meal plan were raised through donations from the Simpson community.

“It’s really great for the schools and communities to pull together like this,” Lain said.

Sophomore Nathan Arentsen and about two dozen volunteers have been standing at high-traffic areas in Indianola and surrounding communities with buckets this past week, asking for donations to the Red Cross for relief efforts.

These volunteers were hoping to raise about $1,000. The group has raised more than $3,000, and many local businesses from Indianola have expressed interest in partially matching the sum.

“It’s been incredibly successful so far,” Arentsen said. “I can’t believe the support we’ve received. As long as people keep giving, we’ll continue to be here.”

Along with students donating their time, Chris Waddle, chaplain and director of church relations, has made an effort through e-mails to make students, faculty and staff aware of the opportunity to donate to the United Methodist Community on Relief. Waddle has received over $650, not including donations made online.

Waddle said he’s been very pleased with all the contributions that have come to the chapel and is excited to see students getting involved.

The chapel is currently planning a memorial service for Friday, the day designated as a national prayer day for the victims of Hurricane Katrina. Also, a service trip is being planned for spring break to help in the areas that were hit.

Waddle himself is a native of Hattiesburg, Miss., about 112 miles northeast of New Orleans. He has family still in the area. Luckily, all of his relatives are safe, but he was shocked and amazed when he saw the destruction on television.

“I kept hoping things would get better, but things just kept getting worse,” Waddle said.

Lain is originally from New Orleans, with 11 siblings still in the area, all of which are safe. Three of his brothers and one sister stayed in the area during the hurricane. None of them have been allowed to return to their homes, but the family fears the worst.

Lain’s childhood home is under 6 feet of water.

“I’ve tried to encourage my family to come to Iowa, but there is a fear of separation,” Lain said. “I’ve also been trying to give them emotional support. What they’ve been going through is very traumatic.”