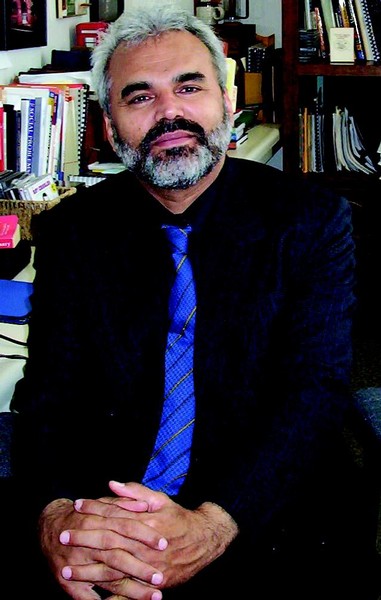 Visiting Fulbright scholar, Dr. Ali al-Hail, can summarize where he’s traveled in two words: “All over.”

It’s an accurate statement. al-Hail’s worldwide journey began after he completed his bachelor’s degree in his home country of Qatar. He then traveled to Britain where he received his postgraduate degree from Leicester University, his master’s from the University of Wales, and his doctorate from Durham University.

Despite his extensive travels, al-Hail is enjoying Iowa.

“I have had such a nice time since I arrived here,” he said. “I fell in love with Indianola, I must admit.”

Al-Hail’s interests span a wide range of topics. From psychology – al-Hail is a practicing psychiatrist – to English and Arabic poetry, this scholar genuinely enjoys learning and teaching others.

Al-Hail is a professor of mass communication at the University of Qatar. He also serves as a member of the United States Arab Association for Communication Educators, and he’s particularly passionate about bridging the cultural divide between Arabs and Americans.

“I believe that only through this face-to-face dialogue, Arabs and Americans can solve their differences,” al-Hail said.

Al-Hail said it’s necessary for Arabs to view American culture from an American point of view, and for Americans to attempt to view the Muslim culture from a Muslim point of view. Most importantly, al-Hail stresses that we’re all human, and therefore, all united. This theory is evident in the scholar’s teaching.

“I focus on humanity,” al-Hail said.

Al-Hail said for the most part the education systems are similar in American and Arabic schools. Still, al-Hail said both societies need to focus on using education to increase cultural understanding at a very young age.

On his tenth visit to the United States, al-Hail is particularly taken with the culture and lifestyle of the Midwest. Even though he has a full schedule of class lectures and forum events at Simpson, he has taken the time to learn about various aspects of college life. He said walking tacos and Mountain Dew are among his favorite aspects of the lifestyle at Simpson.