Blessing of the animals 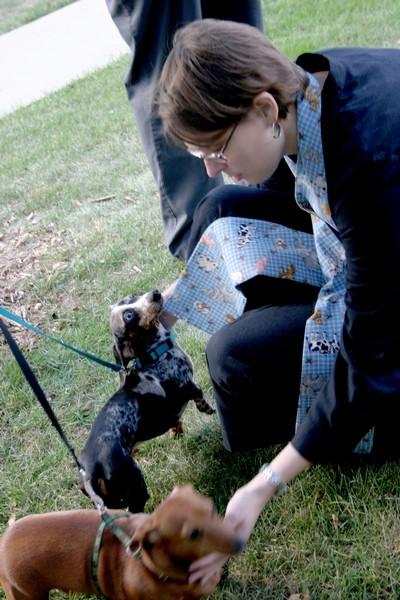 Cats were once worshipped as gods, but that is not the reason so many felines were at church on Sunday.

Cats, dogs and even rabbits filled the yard at Smith Chapel to be blessed by Chaplain Angela Gafford, director of the Religious Life Community.

The Blessing of the Animals ceremony is held every fall in honor of Saint Francis of Assisi’s love for all of God’s creatures.

Gafford introduced the service to Smith Chapel because it was a traditional service at other churches she served before coming to Simpson. She also believes it helps get youth more involved in church.

Gafford’s cats, Eeyore and Tigger, were the guests of honor.

Steve Emerman, assistant professor of geology, brought his dog, Zohar, to be blessed and prayed for. Zohar, which is Hebrew for “enlightenment,” comes to class with Emerman daily.

“It’s a service to bless our relationships with animals,” Emerman said.

Emerman said people’s relationships with animals are so important, he’s planning on teaching a May Term course called “Blessing the Animals.” The course will focus on the relationships between God, people and animals.

“You can’t relate to God without relating to animals,” Emerman said. “It’s a three-way relationship.”

“It’s fun to meet the animals in the community,” Luhrs said. “This service helps people get to know each other and their animals.”

Luhrs and her mom, Amiee, also brought their dogs, Pinball and Prince. They have eight cats at home, and a fish. Unfortunately, the cats and fish had to stay at home because they do not ride well in the car.

Both Reser and Doling agreed it was a sentimental service and attended to show their support.

“[We came to] support Angela [Gafford], to play with other dogs and to be blessed,” Reser said.

In all, approximately 25-30 people brought animals to the second annual Blessing of the Animals service, with the most original pets being the Luhrs’ rabbits.

In past services, Chaplain Gafford has blessed mice, snakes, sheep and a goat.

Gafford personalizes each pet’s prayer by asking the pet-owner about the pet. If a pet is sick or has recently undergone surgery, Gafford prays that the animal does not experience pain. She also prays for the joy and meaning the pet brings into the owner’s life, the protection the pet brings and the love shared between owner and pet.

Like most church services, treats and fellowship followed the Blessing of the Animals. Treats were available for pets and their owners alike. This was done to show the value of human-animal relationships.

“Relationships between people and animals are a very important thing,” Emerman said.