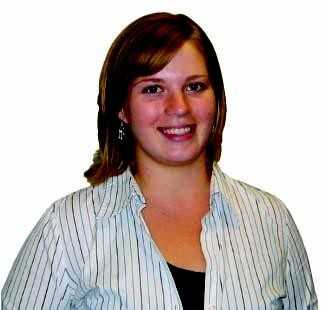 People keep telling me, “This is Iowa, Kate. We don’t have to lock our cars all the time. We can have self-serve sweet corn stands on the side of the road and not have rampant corn theft. We can walk around town at night. People aren’t as bad as you think. It’s OK.”

Oh, yeah, I guess growing up on the mean streets of Nebraska must’ve warped my perception of what people are really like.

But, for all of us, that perception of just how safe we are at Simpson – good old Simpson – was blown apart last week.

Yes, even my perception of how safe I am was changed: Me, the girl who won’t let her gas tank get half empty because the fumes could build up and make the car explode or stop at interstate rest stops because she’s afraid of truckers and who won’t ride carnival rides because they aren’t inspected by the state, only by carnies. Kate Paulman, possibly one of the most neurotic and self-preserving 21-year-olds ever, got scared of something.

But this time, it had a basis in reality.

A Simpson freshman was harassed last month. But it wasn’t the typical harassment any senior-fearing freshman deserves: It was serious. Shockingly serious. The things the alleged harasser did to her are – I can’t even think of an adjective strong enough – disgusting.

The fact that it happened in Kresge is even more disgusting. I thought the story last week was an important one to publish, and I think most of the Simpson community would agree. I also thought it was important to portray just how disgusting the incident was to dispel any belief that it was, in any way, just a prank.

You know, I can actually see moms as they pick up the paper while they’re on campus tours with their kids. I wish I could see their faces when they read the story.

And so, if Simpson loses a few recruits after their moms see the story, I’m sorry – but it’s probably for the best.

Actually, I’m not really all that sorry.

The truth is, having a few less students wouldn’t really hurt Simpson. In fact, such repeated record-breaking enrollment is surely one of the factors that allowed this harassment to happen.

Obviously, there are going to be a few bad apples in any bunch of students. But, increasing the number of students increases the chance of getter even worse apples – sometimes very, very twisted apples. Instead of taking everyone that applies, Simpson should become more selective.

And while I’m at it: during my college selection, someone here told me students have to have a score of 25 on their ACTs to get in. I’ve since found, through personal observational research, this cannot possibly be true. It’s likely that the more intelligent the student body is overall, the less harmful shenanigans will go on.

Second, if Simpson didn’t have coed dorms, this wouldn’t have happened so easily. Sure, it still could’ve happened, but there would’ve been more than a hallway separating the accused and accuser. Again, this goes back to Simpson’s too-high enrollment. If Kresge and Barker had been kept as single-sex halls for freshmen, the likelihood that the situation would escalate as horribly as it did would decrease.

When I was a freshman, if there was a safe place on campus, it was Kresge. But then again, that was before we had all-access clearance to the dorms during the day. Now, even if Kresge and Barker hadn’t been coed, the harasser could’ve still gotten into the building during the day. Sounds like a bad idea to me.

Oh, and the CA had a notebook – a notebook – full of all the room codes. And it was sitting around the room for the kid to grab. Sounds like an even worse idea.

This problem – this “isolated incident” of harassment – is a problem of university magnitude, not college magnitude.

Maybe if Simpson weren’t trying to grow too big for its britches, this might not have happened.

But at the same time, the problem was handled in college, not university, fashion.

Simpson Security wouldn’t comment on the story before it was published. Someone could’ve said Simpson will do all it can to prevent any kind of harassment on campus. Instead, it said nothing.

The most frustrating part of all of this is that Simpson doesn’t seem to have handled the situation properly. If it had, everyone would’ve felt a little different at the end. And it would probably, right now, be a total non-issue.

In high school, a teacher said something really weird to me. He said, “Katie Paulman, I’m going to put a bullet in you.” Weird, right? I know. Nobody calls me Katie.

But anyway. The point is, the school district took quick and correct actions. The teacher was out of the school while they conducted a further investigation. Now, if the school district hadn’t acted, if they’d brushed off my concern, I’d still be upset about it. In this case at Simpson, nobody really seemed to do anything.

Which is why the police had to be called.

And that’s how this whole mess got started.