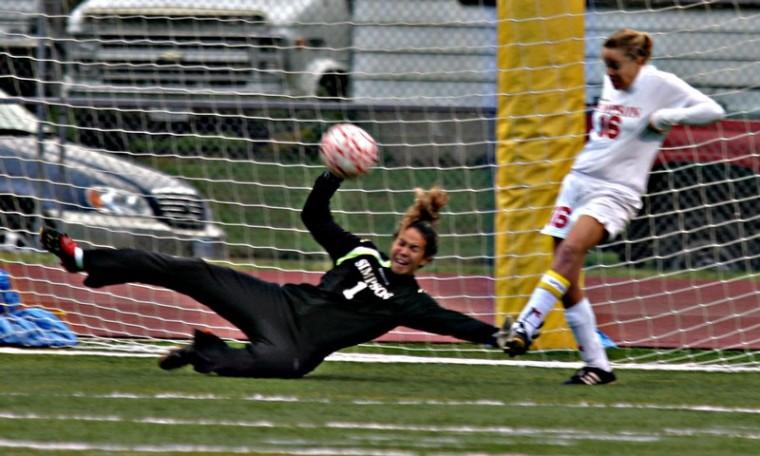 Fantastic freshmenThe success of this year’s women’s soccer team is going to be hard to stop. The team is starting its season with six new freshmen as well as a new head soccer coach, Cory Chapman.

Despite the new additions, senior Kelli Demetri is proud of the way the team is bonding.

“Our biggest success for the team this season would have to be our team unity on and off the field,” Demetri said. “This season has been the best in my four years, in terms of everyone getting along and remaining positive with one another.”

Though Chapman is new in the position of head women’s soccer coach, he’s not new to the school or the program. Chapman has been Simpson’s head coach for the men’s junior varsity team and assistant coach to the men’s and women’s varsity soccer teams for three years. Chapman said he felt welcomed by the team in his position as head coach.

“It’s an adjustment, I feel responsible for every aspect of the team,” said Chapman, who is also the athletic facility manager. “It was a good transition though, because I already knew most of the girls.”

The coach started working with upperclassmen players in February. Chapman wanted the players’ input early on so the team could develop in both the regular season and the offseason.

“My goal ultimately is to get the team to that next level,” Chapman said.

Chapman said at first it was hard for the women to actively participate in decisions concerning team matters, but they have gotten used to stepping up and filling that role.

“Cory has definitely had a positive effect on our team,” Demetri said. “The whole attitude and direction of the program has changed and we have had much success this season. I can only forsee it to improve in years to come,” Demetri said.

Under the direction of Chapman, freshman goalie Whitney Franker was named IIAC Player of the Week for the week ending Sept. 25. Franker stopped nine of the 10 goals in Simpson’s win against Carleton. Regardless of her success, she remains grounded and humble.

“I was excited but I didn’t want to let it get to my head, I just had a few good games that week,” Franker said. “I feel a little more pressure after being named player of the week, but I can’t let it affect my playing.”

Though freshmen fill many of the team’s starting positions, the rest of the team doesn’t seem to mind. Their camaraderie is easy to spot among the players. Together the team is working to transform the program, regardless of what year they are in school.

“The team has accepted the freshmen starters with open arms,” Demetri said. “They deserve to be out there and have earned their spot on the field.”