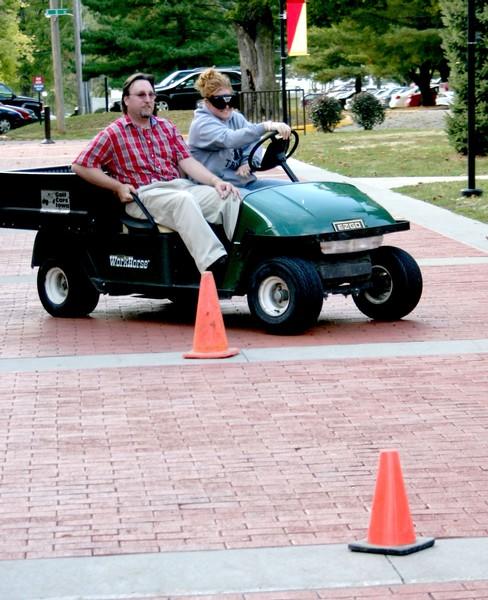 Junior Joan Ritho tried her drunk-driving skills and found out why drinking and driving is such a problem.

“I thought I was fine, but my driving didn’t feel the same way,” Ritho said. “Alcohol awareness is important because when driving, you don’t know you’re drunk, you think you’re fine until it’s too late.”

But she wasn’t on the road. She was participating in drunk-driving simulations outside of BSC last week.

Students were scored on their performance driving a golf cart while wearing beer goggles.

Junior Suzanne Barrett won first place with a time of 52 seconds without hitting a single one of the orange cones outlining the course.

“No one passed the field sobriety tests,” Director of Security Chris Frerichs said.

The event was also put on due to the efforts from the Indianola Police Department. The IPD helped administer the tests and provided equipment including the Fatal Vision goggles.

Throwing on the beer goggles is a great learning experience for understanding the effect which alcohol has on driving skills.

According to the Iowa State Patrol Operational Report for 2004, impaired driving awareness is extremely necessary due to the number of operating-while-intoxicated arrests. In 2004 they reported to have made 2,238 OWI arrests, 150 of which involved people under the age of 21.

“Giving everyone an idea of what drinking and driving is like from a sober state of mind really puts it into perspective,” Scieszinski said. “Now the real problem is getting everyone to think about that before they drive drunk.”