Eyes on the prize: Swimmers ‘expect to have a good season’ 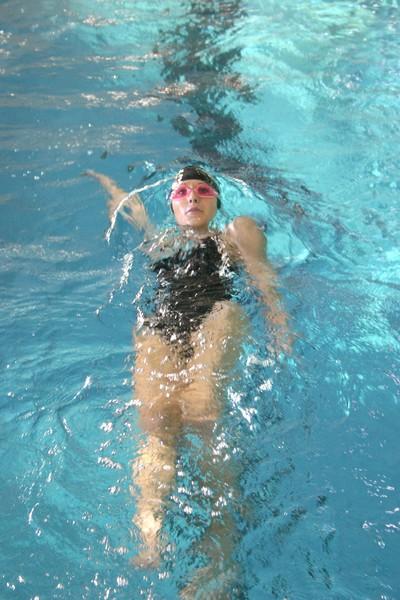 Simpson’s swim team will begin its season tomorrow with a meet in Cedar Rapids against Coe College, quickly followed by its only home meet this year on Saturday against Loras College.

“Our first meets of the season will be a learning process,” he said via e-mail. “Where does each athlete fit into the lineup, etc. It will also be a good test of our early-season fitness.”

“I expect us to have a good season,” Fick said. “We have a lot of new girls out this year and four returning swimmers who can step up and lead the team at first. Being such a small team, everyone will have a leadership role as the season starts to progress.”

Fick is one of those returning, and she has definite goals for her last year on Simpson’s swim team.

According to Fick, her goal of breaking both these records again is “very realistic.”

“It takes lots of practice,” she said. “Practice, practice, practice. Right now I do one a day, but soon the distance swimmers will do morning and night practices. I might add a third one for myself.”

One of the six freshmen on the team is Kendra Frush. At press time, she didn’t know what events she’d be swimming in, but she shares Fick’s high hopes for the team. Frush said the entire team’s goal is similar to her own personal expectations.

“My main goal is to improve as a swimmer and continue to improve throughout the season at each meet,” Frush said.

She said while the team has a significant number of freshmen and will rely on them to do well in competition, the juniors and seniors want to help them succeed.

“There’s a little bit [of pressure] but I think the upperclassmen really help build up the rest of the team and give us good leadership,” Frush said.

Corley said the team has lost some of its leadership, especially in its relay teams.

“We had some swimmers not come out for the team this year and that hurt us,” he said. “We were looking to be a little bit stronger than it turned out. If we had those swimmers back, our depth would be much better and that always helps a lot with the relays.”

Fick said she hopes the Simpson community offers the team more support than it did last year.

“I think the more support we get from the student body, the better we’ll do,” Fick said. “Swimming is an individual sport, but it’s also based on support from the crowd. We’ll still do well no matter what, but fans make us push ourselves harder.”

One way the team plans to gain that fan base is by selling shirts again this year. Last year the shirts boasted the slogan “Just Stroke It” and Fick promises something better this year although she wouldn’t give any details.

“I’ll say this, they’re going to be really good.”