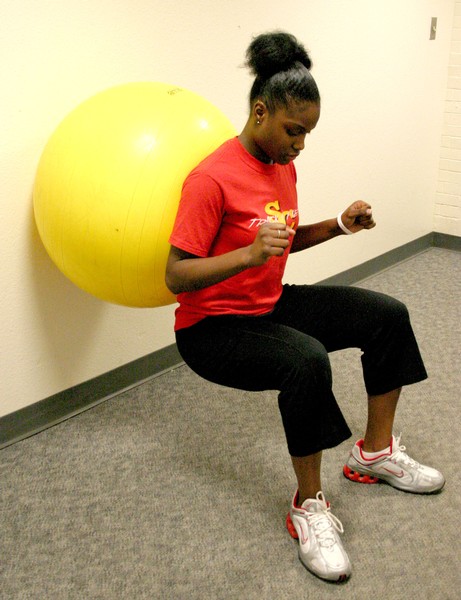 Every athlete risks injury during any sporting activity. How an individual recovers from that injury will determine how successful they can be in future athletic activities.

Simpson’s athletic-training program is designed to help this process along as smoothly and successfully as possible, according to Mike Hadden, the program director of athletic training and exercise science.

“The short version: rehab is the strength and conditioning process of healing after an injury,” Hadden said.

Athletes begin the process of rehabilitation immediately after the injury occurs even if surgery is needed down the road. It continues even after a student has had surgery.

“We started doing rehab here 10 years ago,” Hadden said. “Right after surgery you want to start the rehab process again. You have to slowly progress into it and start with a range of motion.”

Injured athletes look to the trainers for help as well as the athletic-training majors.

“The trainers know what they are doing and work hard to get me back into the game,” said junior Jason Parkinson, who recently sprained his ankle during basketball.

It isn’t easy being the one to break the news to an athlete, or his or her teammates and coaching staff.

“It is difficult for us to tell the athletes they cannot play,” Hadden said. “It’s tough telling an active person they can’t be active anymore.”

The recovery process varies based upon the injury, but it usually takes a couple weeks, unless surgery is needed, which can extend the process up to four to six months.

Junior Nina Ward tore her ACL last August, and is now in the rehabilitation process.

“It isn’t the end of the world,” Ward said. “Life goes on and the fear has to go away and you have to bounce back.”

Rehabilitation is good for the body because it can often teach athletes to work harder than before.

“If an athlete is treated right and rehabbed right, then the athlete can be better than before because they are going through supervised workouts and they work harder than they ever have before,” Hadden said.

There are risks involved with rehabilitation, but only if the supervisor is being careless.

“The body can respond negatively if you push too hard or are too aggressive, but you just need to make the adjustments,” Hadden said.

Recovering after an injury can be tough both mentally and physically for the individual.

“Bad days are tough,” Ward said. “When you still have to go in and meet their expectations and you feel like you just want to quit.”

The timing of injuries can also play a major role in the rehabilitation process.

“It is physically hard to get back in shape after an injury,” Parkinson said. “Especially since this is the beginning of our season with all our conditioning.”

Ward felt very similar concerning the timing of the injury.

“I underestimated how difficult it would be to get back into shape,” Ward said. “We have excellent trainers who make me work hard.”