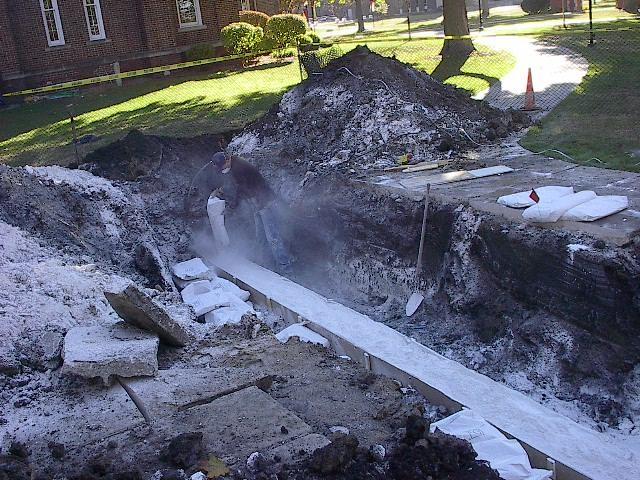 A broken pipe, an active sprinkler system and a ripped phone feeder have caused big problems on campus in the past two weeks.

The three problems can be related to the steam heating and cooling system at Simpson. Over fall break, Campus Services had to dig up a large area near College Hall due to an underground break in a main steam pipe. The problem is not new to Simpson – this is one of many times it has happened.

Facilities Director Jesus Mendez said a number of factors contribute to the break.

“The pipes are made of steel, and one of the biggest factors is the age of the pipe,” Mendez said. “At the temperature [of the steam] we run, it’s very hard on the pipes.”

Another factor is the weather. During the spring and fall Mendez said freezing and thawing makes the pipes expand and contract. Combine that with constant condensation in the pipes, and it’s easy to see why there are nearly perpetual shoots of stream rising from the ground.

The break by College Hall occurred in a main pipe running to Pote Theatre. Gary Dooley, assistant director of the physical plant, said this particular break can be traced back five years earlier.

“This happened to be a bad weld,” Dooley said. “We repaired it five years ago at the main header and with the shifting, expanding and corrosion in the pipes, the weld just broke.”

The break forced crews to dig up an extensive area, which led to another problem. A phone feeder was caught and ripped during the digging, Telephone Technician Charles Thomas said.

“The rip was found shortly after it happened,” Thomas said. “I was contacted, and then we called Baker Electric from Des Moines and they came down and did the splicing.”

Thomas said the incident is fairly isolated, though outages can happen at any time.

“It was just a freak accident, just kind of one of those things,” Thomas said. “The phone lines are sensitive to water, because they are copper wires, and of course, with and construction projects and digging, there can theoretically be a problem.”

Thomas estimated crews put in 18 hours of overtime labor, plus the cost of a new phone feeder for a total cost of at least $2,300 in unexpected costs. The phones needed to be repaired by Monday, so the college needed immediate help from outside sources, which raised the cost.

That price is small compared to an estimated $7,000-$8,000 for repairs and replacements in Mary Berry 120. The sprinkler system activated when the temperature reached 160 degrees in the room.

Because the air flow of heat came out near a sprinkler head, the high temperatures set off the system.

Mendez said crews worked all night to have the room as close to normal by Monday morning.

“We had people cleaning it up and sanitizing it right away,” Mendez said. “All the right people were notified on Sunday if they had to move classes – it just made things smoother to run class. Everything was back to normal by Tuesday.”

The room housed extensive audio-visual equipment which all has to be replaced. At press time, it was not known how extensive the damage was to wiring.

Media Services Manager Sheila Allbee said the college has a specific risk-management fund for situations like this. She also said in total, everything would cost under $10,000.

Dooley chose to see something positive about the damage.

“Well, it’s a good thing to know sprinklers work,” Dooley said. “If there was a fire, we’re glad to know that it works.”