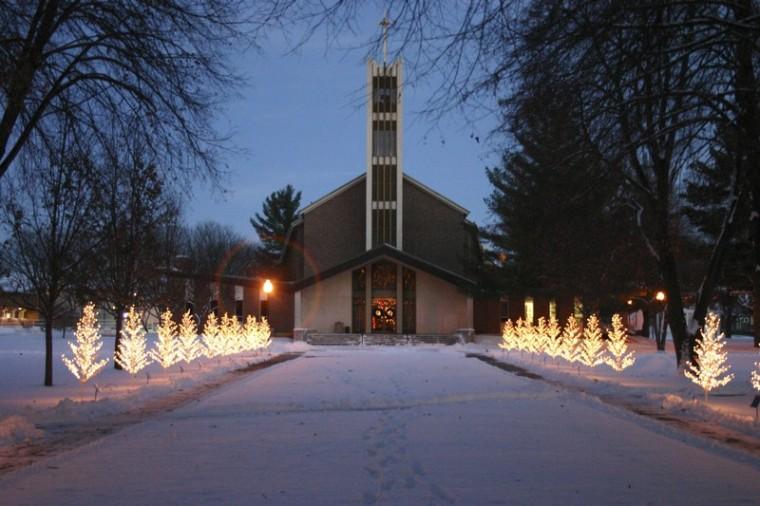 The Simpson Guild is dreaming of a bright Christmas: It recently set up the annual Avenue of Trees, located between Smith Chapel and Hillman Hall.

The trees are one of the ways the Guild raises money for scholarships for Simpson students.

“Carol Schipper in Public Relations saw something very similar in another state with angels in trees,” Guild President Becky Beaman said. “It’s a real pretty display and provides a nice walkway for carolers and other people while at the same time earning money for our students.”

Alumni, faculty members and other members of the Simpson community bought sponsorships of the trees, at the cost of $40 per tree.

There are many reasons why people chose to sponsor the trees. The most common is in remembrance of a loved one, but Beaman emphasized this isn’t the only reason.

“Anything from simple greetings to thank-you messages to honoring people; it doesn’t just have to be in memory of someone” Beaman said. “There is a group of eight sorority sisters, who are alums, and call themselves the Rubbermaids. They still get together and play bridge and they purchased one to show their appreciation of Simpson.”

One faculty member who sponsored a tree is Professor of Physical Education Bob Nutgrass.

“My dad passed away years ago,” Nutgrass said. “He had got to see some grand-kids, but he’s been gone for many years now and it was my grandson’s first birthday this Thanksgiving. I did it in memory of my dad as well as his first great-grandson’s birthday.”

Nutgrass said he didn’t really know about the program when it began last year around the holidays, but when he learned of it this year, he thought it was great.

Even though he wasn’t sure the project would raise a lot of money, he still felt it was a worthwhile cause.

“That’s why I did it,” Nutgrass said. “It’s not going to raise a whole lot, but it’s good to get a start. It beautifies the campus and is nice for the holidays.”

The Guild is hoping to raise at least $1,000 with the trees.

“We should make it if we sell all the sponsorships,” Beaman said.

There are 24 trees this year, which is down from the 26 that were up last year.

“We lost a couple due to some damage,” Beaman said.

The trees are plastic with lights wrapped around them.

Beaman said the trees came from Des Moines where she was able to get them with a discount through an alumni.

Beaman said despite the discount on the trees, they are hard to replace because that style is no longer made.

Beaman said students are allowed and encouraged to buy sponsorships. There have been no student purchases this year, but Beaman said last year one student had sponsored a tree as well as some parents of other students.

“I would do it if I had money,” senior Sarah Cochran said.

Despite not having enough funds to sponsor a tree, Cochran thinks it’s a good idea.

“I think that anything that raises money for Simpson students is a good idea,” Cochran said.

Individuals aren’t the only ones who can sponsor trees: several academic departments are participating as well.

Last year, according to Beaman, people from the building of Mary Berry got together and sponsored a tree. This year the departments of Information Services and Admissions sponsored trees.

Beaman said the Guild always sponsors a tree for a past member.

“This year we did one for Grace Overton, who was on the board of Trustees and was a long-time Indianola native and Simpson alum,” Beaman said. “The Guild hopes the money they raise will benefit many students and that everyone enjoys the Avenue of Trees.”