Group members into playing games with each other 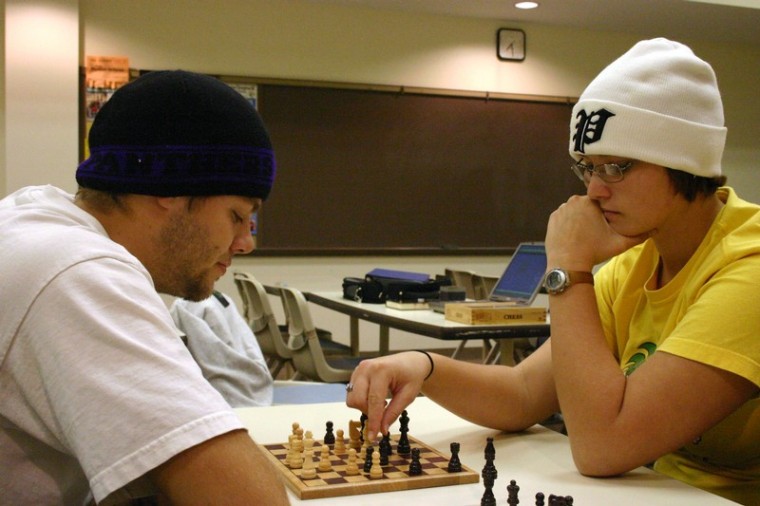 There is a chess club on almost every college campus.

But at Simpson, there’s something more. Simpson’s club is about more than checkmates and stalemates.

The Strategic Games Club plays just the kind of games its title infers.

The group started out as a chess club, but decided to redirect the focus in order to encompass a larger group of people.

It was started this year by freshman Tim Fairfield, who is currently president of the club.

The group is looking forward to playing Risk, Stratego, Magic: The Gathering, variations of chess and many other strategy-based games. The group has even discussed the strategies of tic-tac-toe.

“We’re open to playing any strategy-based game,” Fairfield said. “As long as there is a consensus on what to play. We can’t have six people playing six different games.”

Fairfield can remember playing chess in third grade with teachers and fellow classmates. In high school, he started a chess club, and he knew he’d want to bring a chess club to whatever college he attended.

Simpson is just the place for Fairfield to create a club. Through mass e-mails and word of mouth Fairfield found other strategic-game players.

Palmieri played and studied chess when he was younger, but admitted that if he tried his hand at playing the Strategic Game Club members, he might get beat.

Freshman Dillon McKelvey acts as the Vice President of the club and junior Tyler Lloyd serves as both secretary and treasurer.

“Anyone is welcome,” Lloyd said. “The more, the merrier.”

“It’s not just a matter of playing games, it’s about expanding your mind,” Lloyd said. “It’s about thinking analytically and logically. It will help improve your analytic thought.”

Fairfield said he, along with the rest of the club, is willing to teach people how to play chess.

The group is currently trying to get funding to buy chess boards, as well as other strategy-based games. Until then, members are bringing whatever games they have access to.

In the future, the group is looking forward to holding tournaments and playing electronic war and civilization games.