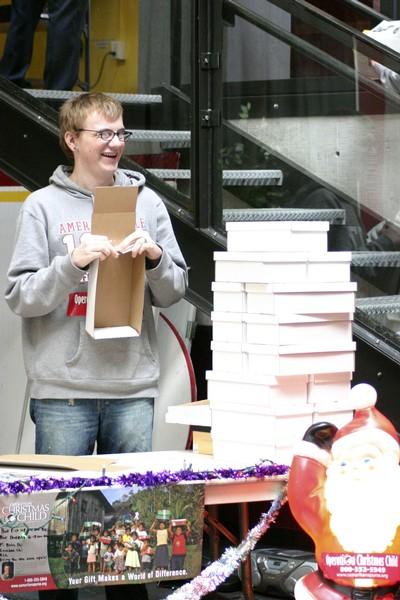 Operation Christmas Child, a charity project set up by Lambda Chi Alpha, Phi Beta Phi and the Religious Life Community, will deliver holiday cheer to more children than ever before in it’s three-year history at Simpson.

Senior Marcin Wojtczak is the project’s originator, along with juniors Justin Davis and Mike Stillman. He said OCC has become the largest one-time charity event on campus in years.

The project focused on giving presents to children in impoverished countries.

Volunteers handed out boxes to students, faculty and staff at Simpson and collected them a week later. The boxes are taken to Minneapolis, Minn., and distributed worldwide to needy children.

According to freshman Mandy Warren, the boxes include a collection of small toys, a generic card and items that would make a child laugh.

“The common toys that these children have include rocks, sticks and actual guns,” Stillman said. “It is wonderful that Operation Christmas Child helps deviate from this common standard.”

Wojtczak pointed out that OCC would not be possible without the help and support of the Simpson community. He said at first he expected to have to rely on the support of local businesses in order to succeed.

“During all three years Simpson students proved us wrong because they were the force behind it.”

Davis said the project is open to anyone interested.

“The goal is to get everybody on campus involved,” Davis said. “The Simpson community comes together, as does the Greek Community.”

This year, RLC was asked to help with OCC, which Davis said was a great advantage.

“The religious faith on campus draws in a lot of people,” Davis said. “I wanted to add RLC not only because we can get more boxes, I wanted to extend the opportunity to that community to do it. They have really stepped up. I don’t know what I would have done without them.”

Stillman said people from other religious communities helped out too.

“Students from other religions aside from the Christian orthodox, such as Jewish and Buddhist, are also contributing,” Stillman said.

Students not only filled Operation Christmas Child boxes with toys, but when boxes ran out, people were to respond with more boxes.

“It is a real testament that Simpson isn’t full of cliche college students who just drink beer on the weekends,” Davis said. “They are responsible, care about the community, and actually want to extend a helping hand.”

“I think we do it because it is not only a gift,” Wojtczak said. “There is a hope; something special.”