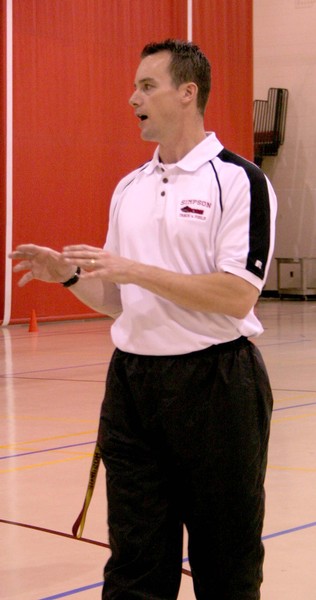 The Simpson Storm track team is in the fast lane with a new track and field coach, Dave Cleveland.

Cleveland is the coach for the men’s and the women’s teams, as well as an assistant professor of physical education.

“The program needed someone like him, someone who’s going to stick around and work with us through the ups and downs,” senior and distance runner Lance Harris said.

According to Harris, Cleveland brings organization, energy and the love of the sport to the team.

“His personality is energetic,” Harris said. “That helps me, as well as the other athletes, work hard.

Cleveland came to Indianola after being a high school coach for Webster City as well as for Cedar Falls. He was the head girls track coach at Webster City from 1990 until 1994 and then became the head of boys track at Cedar Falls, where he coached from 1994 until 2005.

This is his first college coaching job, but junior Britta Johnson said he brings in a great background of how to form a team.

“He brings to the team knowledge of what a good team is built around,” Johnson, a sprinter and long jumper for the team, said. “From a recruiting stand point, because he was a high school coach for so long, he has connections with other coaches, which may help in getting more high school athletes to look at Simpson.”

Cleveland is an accomplished athlete himself. He’s a 1990 graduate of the University of Northern Iowa where he was a three-time conference champion in the high jump, a four-year letter winner and was five-time Academic All-Conference.

Though he’s new as a college coach, his team stands behind him with support.

“He knows his stuff,” senior Reid Leichty, a mid-distance runner for the team, said “He has good credentials which speak for themselves”.

As a new coaching addition, Cleveland is ready to fill the shoes of a college coach.

“I am ready for a new challenge,” Cleveland said. “Track has always been my main sport and it’s nice to come to a place with high standards in track and field.”

Cleveland said the program will undergo changes this year. He said the team has strong leadership and positive attitudes, which is needed during this time of transformation.

“This year we are working on improvement on a daily basis from week to week, as well as working on personal goals,” Cleveland said. “These goals over time will lead to consistency in the program and have expectations known which will lead to establishing a positive attitude toward the track and field team.”

The athletes have also helped to make Cleveland feel welcome.

“The team has shown that they support him by respecting him and doing what he asks of us in practices,” Leichty said.

Johnson said Cleveland just wants the best from the team.

“The coach just asks everyone to do their best,” Johnson said. “He told us ‘you only fail if you don’t try,’ which I, too, think is the truth.”

The new college coach said it was a big adjustment in the beginning.

“I was making the commute from Cedar Falls to Indianola several times a week,” he said. “Now everything seems to be falling into place.”

Cleveland decided that Indianola would be a fit for him as well as his family.

“This is where I want to be,” Cleveland said. “This is a long term commitment. To me Simpson track is the ultimate.”