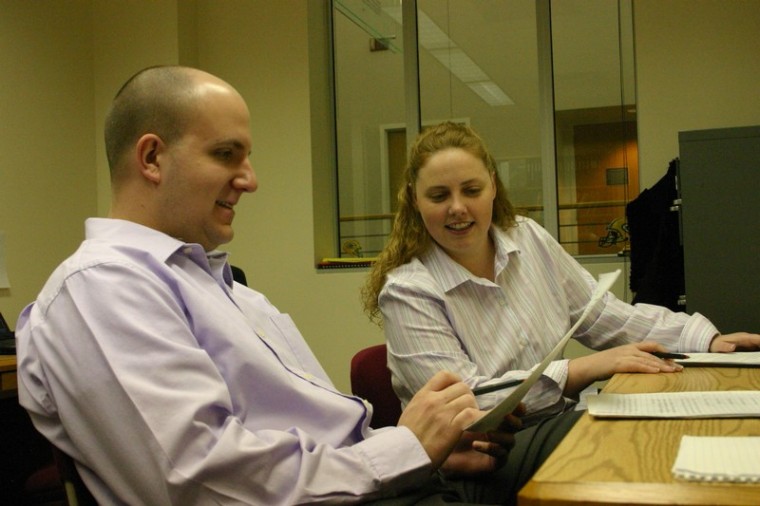 There’s a new romance on campus between two of Simpson’s newest faculty.

“Her last name is Czarneski and mine is Schellhorn, so a lot of students don’t put that together,” Schellhorn said.

Even though the two don’t share the same last name, the couple are together and so far have made a terrific team here at Simpson.

Czarneski and Schellhorn were married Aug. 9, 2003 in Green Bay, Wis. and the two met at Mount Mercy College in Cedar Rapids where both were math majors. Both received undergraduate degrees in mathematics and then headed to Louisiana State University for graduate school.

While attending graduate school, each student-taught classes to help pay off tuition. For this reason, Czarneski and Schellhorn aren’t new to the classroom.

However, both said teaching at a university is a completely different environment from the one the couple has experienced here at Simpson.

“Being at a big research university like LSU is a lot different than teaching at a small school like Simpson,” Schellhorn said.

According to Professor of Mathematics Murphy Waggoner, the school had no idea the two were married when they were hired. The administration realized the two were husband and wife when it noticed the same address on their applications.

Waggoner said the two are a great addition to the staff.

“It’s great working with them,” Waggoner said. “It’s nice to have an input of new energy into the department.”

This seems to be the popular opinion about the couple.

Sophomore Jonna Anderson, secretary of the math club, said she’s enjoyed working with the couple through the club since the two arrived here.

“They’ve really taken over the math club this year and it’s been fun to work with them,” Anderson said. “They are a great addition to the faculty.”

“Simpson listed a position and fortunately we were both able to get on,” Schellhorn said.

The two are very much enjoying life here at Simpson.

“We like the college atmosphere so that’s a huge benefit of being on a college campus,” Czarneski said.

Czarneski and Schellhorn have always enjoyed sports, plays, lectures and other events that take place on a college campus.

“We go to a lot of talks together – they’re like our dates,” Czarneski said.

In graduate school, the two liked to go out to eat at seafood restaurants.

Czarneski and Schellhorn have yet to find a seafood restaurant in Iowa that matches the freshness of Louisiana, but both still enjoy the occasional outing, mainly because it means no cooking or doing dishes.

“We made this rule that we couldn’t talk math during dinner,” Czarneski said.

One might think being married would get in the way in the workplace, but this isn’t true for Czarneski and Schellhorn.

“There’s a lot of conveniences that come with working at the same place,” Schellhorn said.

While both are in the math department, the two only see each other a couple times a day – riding to school together, eating lunch and the ride home.

This provides more of a convenience for them.

“We each teach our own courses,” Schellhorn said. “We work together but at the same time, Deb does her thing over here and I have my own office and I do my own thing there, so it’s not like we step on each other’s toes a lot.”

Both Czarneski and Schellhorn said Simpson has been a great experience because of the atmosphere and the ability to get involved with the students.

But while at work, Czarneski and Schellhorn are all business.

“They are very professional at work,” Waggoner said. “I think of them as colleagues.”