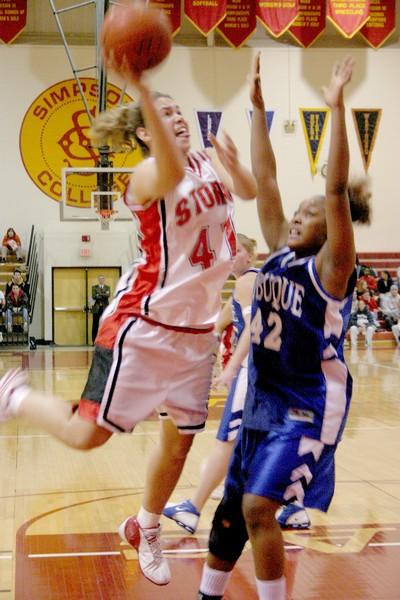 The 2005-06 season has been an exciting one for the women’s basketball team. Ranked first going into the conference tournament, their record is 20-4 and 14-1 in the conference.

After the team’s conference win against Dubuque last Wednesday, they are now ranked first in the conference and also have the home court advantage during tournament play.

Coach Brian Niemuth is pleased with the way the women have played during the season and looks forward to the tournament.

“I think they’ve done a great job so far this year,” Niemuth said. “I think they have a chance to go pretty far here in the tournament so we’re excited.”

Senior Sarah Pearson is also eager to start the tournament.

“I’m really proud of how we’ve done,” Pearson said. “I couldn’t be happier going into the conference tournament sitting where we are.”

Freshman Laura Montague believes that the team’s focus helped the team throughout the season.

“I think we have done a great job so far at staying focused and not taking any teams for granted,” Montague said. “We still need to take one game at a time, though, to finish the season strong and accomplish a few more goals.”

The past season has been pretty exciting and the statistics from the team are outstanding.

To prepare for the conference tournament, not much is being changed from the way it has been through the rest of the season.

“I don’t think we’re doing anything different,” Niemuth said. “We are doing everything that we have done to get this point. I wouldn’t want to change anything right now.”

Pearson believes the key is to keep things intense and keep playing the way they have been all season.

Montague agrees, saying that while the practices may stay the same, there is a certain level of emotion going into preparing for the conference tournament.

“Our team does a pretty good job of taking one game at a time and not getting too far ahead of ourselves,” Montague said. “We play hard every day at practice and try to have some fun no matter what time of the season it is. I think we will get more and more pumped up as we continue to win and advance in tournament play.”

Because the team is first in the conference, they get home court advantage during the conference tournament that starts tonight for the Storm. If they win, they will advance to the championship game on Saturday.

Pearson says that everybody should go support the team, especially since the tournament games for the Storm will be played at home.

“We’ve really appreciated all the fan support this season,” Pearson said. “I’m excited to see if we have that many fans for the playoffs this week.”