Iowa history may be in Simpson’s future 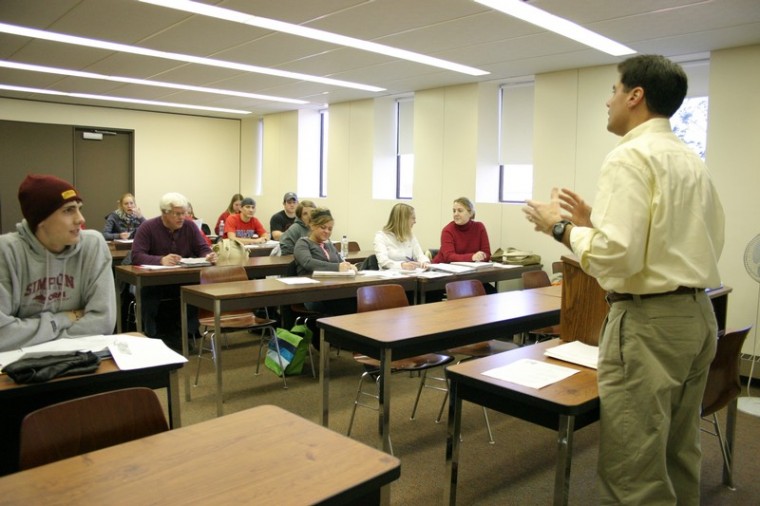 The program would consist of several courses in Iowa history, surveys, research and internships.

“I think that it would be good for the History Department,” Friedricks said. “It will make us distinctive. We could be the center for Iowa history in the state.”

The program is just in the discussion stage right now, but Friedricks is teaching History 390, Iowa History, right now as a trial.

He has also been talking to Academic Dean Bruce Haddox and President John Byrd about the idea. In his opinion there has been enough support from the community to expand from one class to an entire program.

Professor of History Owen Duncan agrees with Friedricks that an Iowa history program would benefit both the department and the college overall.

“It is a great idea because it allows the history students to receive hands-on experience on a topic they have interest in,” Duncan said. “It is a part of their history.”

Friedricks suggested students who are part of the program would help out at Living History Farms and the Iowa State Historical Society.

The department hopes these opportunities will draw college students, but Friedricks pointed out that it would benefit students of all ages.

“It can also be a resource for K through 12 teachers,” Friedricks said. “It will be able to help them teach it better – it’ll be like an outreach program.”

Friedricks said Iowa history could be a popular program because many people would like to know more about their background and about Iowa’s history.

Rachel Unekis, a freshman at Simpson, agrees with him.

“I think that starting this program is a great idea,” Unekis said. “People need to know more about their home state and what got us to the point that we are at now in the state.”

Even though Unekis isn’t a history major she still feels like it’s an important program which should definitely be started here at Simpson.

“I would like to know more about Iowa’s history even though history is not my intended major,” she said. “I am a native of Iowa [so] it would become an interest of mine to find out all that I could.”

Friedricks became interested in Iowa history when he wrote a book on the history of the Des Moines Register. He pointed out that the history of the state and its newspaper are naturally linked. He said he was drawn into Iowa’s history and can’t seem to get enough.

Now he wants to be able to share that with the students here at Simpson.