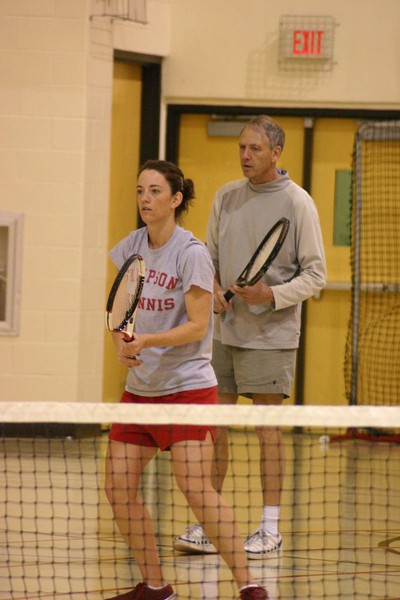 Last fall the Simpson women’s tennis team saw a change in their program. Bob Nutgrass, men’s and women’s tennis coach, decided to take a few years off from being coach of the women’s tennis team. Pat Heller, who had previously served as assistant coach, took over the position and replaced Nutgrass.

Heller’s background as assistant coach together with his background in tennis helped him move up to the head coach position.

“After being an assistant for the men and women both he knew the players coming back and he’d helped me recruit a little bit with the new players coming in so he had a pretty good handle on some of the players,” Nutgrass said. “His tennis background is good – he’s been coaching for a couple of years.”

Senior Heather Anderson has played on the Simpson tennis team for four years. She says the way Heller approaches practices is on a more personal level, perhaps because he does know the players very well already.

“He sees what we’re doing wrong and works on it,” Anderson said. “From backhand to drop shots to anything that was wrong with our game, he’d ask us. He’s a little more personal, I think.”

Heller said the main differences between head coach and assistant are off the court.

The season started off rocky, but the team was able to pull it together later in the season.

“We started out slow,” Heller said. “But the kids rebounded nicely. I think we won six out of our last seven. At conference, every player and every team either equaled or exceeded their seeds. We played our best tennis at the end of the year.”

Overall, Heller is very pleased with the way things turned out during his first season as head coach.

“I was really happy with what we did accomplish last fall,” Heller said. “On the surface it doesn’t seem like it so much, we finished fifth out of nine in the conference. We’re right in the middle. But I thought everybody played almost as good as they could play. Everybody always says to give 110 percent, but that’s silly. You can’t give 110 percent. The players really played well. Our senior leadership was really good; the kids got along well.”

The fall season was a good starter for Heller’s first year as head coach. His favorite thing about being the head coach of the team is practices and watching the players improve themselves.

“I really like the practices,” Heller said. “That’s the most fun. I really like seeing these kids improve. And when I see a kid, well, like Emily DeBolt, who really played so well her senior year, that is the most fun – to watch them do that.”