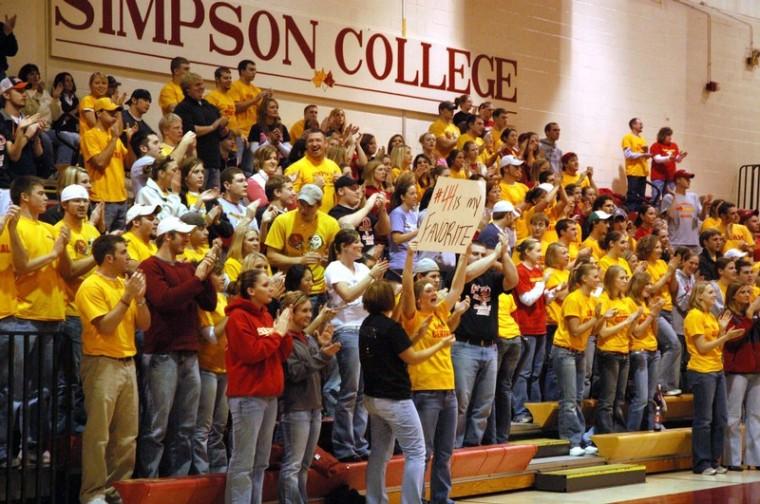 Simpson’s men’s and women’s basketball teams experienced success at home last week, with both teams beating Central on Jan. 21 and Luther on Jan. 24 in a combined 4-0 home stand. Players and spectators alike may have noticed something at these games that brought a smile to their face – increased attendance.

The games saw a surge in what had been a lack in student attendance, and showed a renewal in crowd support. Storm fans were present from start to finish during the women’s 100-point outburst against Central. Fans also urged on the women’s team in the closing minutes of their nail-biting two-point victory against Luther.

The team members took notice of the recent rise in attendance.

“We really fed off of the crowd’s energy and I think it helped us close out the game.” senior Dana Johnson said. “We felt like the crowd was our sixth player out there on the court.”

The men also appreciated a good effort on behalf of the crowd, beating Central in front of 1,000 fans and a raucous student section.

“I can’t say enough about the difference an energetic crowd can make,” senior Scott Ellens said. “It’s easy to get tired late in the game, but if the crowd is into it, it gives us energy to feed off of and we ride that energy for the rest of the game.”

Ellens, who scored 16 points against Luther, most of which came in the second half, particularly appreciated the fans after beating Central in what will most likely be his last game against the Dutch, unless the teams meet in the postseason.

Central beat Simpson in Pella earlier this year, but now Ellens can say he went out on top in the rivalry.

The recent increase in attendance is something that Simpson’s teams of all sports would love to have. While two nights of basketball games may not be enough evidence to say that Simpson has fixed their problem with sport support, players aren’t the only ones that would like to see this rise in support continue.

Sophomore Sheena Smitley is a Simpson cheerleader for football and basketball and says that the cheerleading squad appreciates and feeds off attendance just as the players do.

“It makes our job a lot easier and a lot more fun when the crowd gets involved,” Smitley said. “We have definitely had problems with attendance before and those times make us feel like the hard work we put in to help the players goes unnoticed or unappreciated.”

The players and cheerleaders would love to see the increase in support continue past rivalry games and carry on into other sports and into the next season.

Simpson fans can, however, feel good about their effort this season, as both basketball teams enjoy more fan support than their opponents.

The average attendance at Simpson women’s home games this year is 314, while Storm opponents only average 270 fans at their own home games.

The men have had an average following of 493 fans with their opponents averaging 484.

Attendance is better this year than it was for both teams last year with the men’s team seeing an increase of almost 200 fans per night.

The women’s team is enjoying their best following since the 2002-2003 season.

The football team, Simpson’s only other “revenue-generating sport,” has also seen an increased average attendance and also has had better home-game attendance than their opponents the last two seasons. This past season they had an average crowd of 2,500 fans.

While athletic attendance seems to be on the rise, Simpson facilities can still house even more spectators. Cowles Field House has seating for 1,341 fans, and Bill Buxton Stadium can hold 5,000.