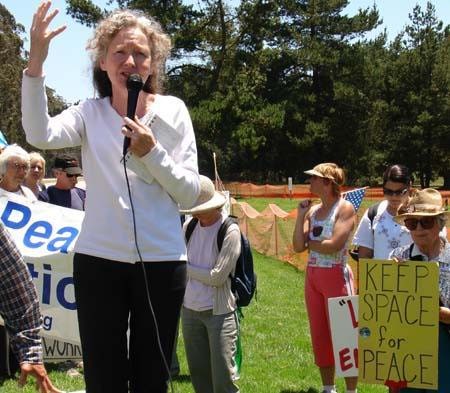 Kathy Kelly, a well-known human rights activist, spoke about her experiences in the Middle East last night in a talk titled, “Putting an End to War.”

Kelly has been part of peace organizations for the last 25 years and is currently helping coordinate the campaign Voices in the Wilderness, which focuses on ending the U.N. and U.S. sanctions against Iraq.

This was not the first time Kelly has been to Simpson College – juniors and seniors may have heard her once before. According to Professor of Management Marilyn Mueller, the turnout for Kelly’s first talk was exceptional.

“She was very well received when she spoke at Simpson College two years ago,” Mueller said.

According to people who heard her speak before, Kelly gives engaging talks that leave lasting impressions. Some students were looking forward to hearing her again.

Kelly can draw on many experiences when she speaks to any audience. She has been to Iraq 22 times since January of 1996, and was on the ground in Baghdad during the U.S. “Shock and Awe” bombardment. During the Gulf War she was part of a peace encampment on the Iraqi-Saudi border.

Due to her protests, Kelly is also a convicted criminal.

In 1988 she was sentenced to one year in prison for planting corn on nuclear missile silo sites, for which she served nine months in the Lexington, Ky., maximum security prison.

Kelly was again incarcerated in the spring of 2004 shortly after speaking at Simpson. She served three months in the Pekin Federal Correctional Institution for leading a protest against the School of America in an effort to close an army military combat training school at Fort Benning, Ga.

Despite the prison time, Kelly has received many prestigious awards, including three nominations for the Nobel Peace Prize for her work in many different campaigns.

Kelly is also the author of “Other Lands Have Dreams: from Baghdad to Pekin Prison.” In this book, Kelly describes her many visits to Iraq, the untold story of the School of America, as well as a typical day in Pekin.

Kelly is currently making her way toward Washington, D.C., but she stopped at Simpson due to Mueller’s connections.

“I was given the opportunity to arrange for Kathy to speak at Simpson College through my association with Catholic Peace Ministry,” Mueller said. “I am on their board of directors.”

While at Simpson Kelly was scheduled to speak in two classes, attend a dinner and give her speech.

Mueller said any conversation with the peace activist is interesting.

“She an incredibly interesting woman with a lot of knowledge and different experiences to share,” Mueller said.

Marilyn Mueller said she hoped Kelly would be as well-received during this visit as she was two years ago and that students would take the time to listen closely to what she had to say.

“I hope people have an open mind when they hear her speak,” she said. “College is all about exploring new ideas and different perspectives.”