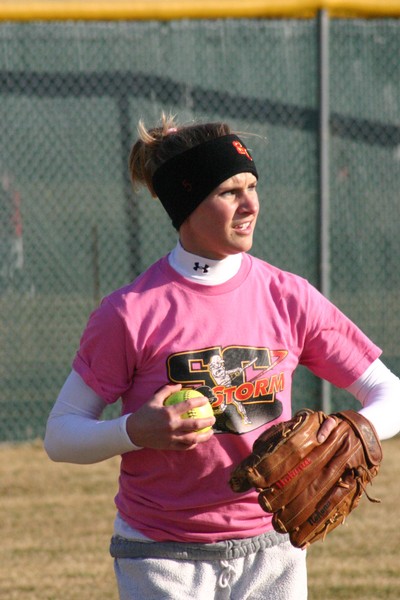 As the season begins for Simpson’s softball team, so begins the final season of their team leader, senior Heather Beeler. Serving for both offense and defense for the Storm, she started all 38 games last season and led the team in not only several statistical categories, but with her intangibles as well. The shortstop is one of only three seniors on this year’s team, the others being catcher Kasey Keimig and pitcher Bradi Smith.

Last season, Beeler led the team with 46 hits, 25 runs, 13 steals and a .365 batting percentage. She was second on the team to then-sophomore infielder Allison Erichsen in total bases at 47 and assists with 59. Erichsen and then sophomore catcher Jill Mitchell were the other Storm players to start all 38 games.

“Heather is a great leader,” Erichsen said. “She has a very positive attitude and always knows how to pick up her teammates.”

“Her main strengths have always been her intensity, her hustle and her work ethic,” Christowski said. “She is probably the toughest on herself, but when it comes to being positive with what goes on with the team, she is always up front.”

The Storm finished fourth in the Iowa Conference last season with an overall record of 27-11. The 2006 season started this past weekend at the Westminster Tournament in Fulton, Mo. Beeler, a native of Truro’s I-35 High School, comes into the new season with some high expectations.

“I just always hope to improve upon what I’ve been doing and to always give 110 percent,” Beeler said.

Improving happens to be another one of Beeler’s strengths, according to Christowski.

“Heather came here as a right-handed batter that struggled to find success [at the plate],” he said. “Since then, she has switched to batting left-handed and has obviously found great success, leading our team in batting last year. Her slap-bunting makes things happen and disrupts the defense, giving us a lot of opportunities to take advantage of.”

Beeler enters her final season looking to add to her career numbers of 91 games played, 75 hits, 54 runs scored, 20 stolen bases and a career batting percentage of .363. Her individual achievements, however, are second to the goals of the team.

“Team goals always come first,” Beeler said. “We would love to get to nationals but winning the conference comes first. I think we have great team chemistry. I have faith in every one of my teammates and hopefully they have faith in me. Hopefully we have a great season together.”

The Storm will be playing in the Rebel Spring Games, a tournament in Kissimmee, Fla, over spring break. Their home opener will not come until April 5, when they will host Wartburg, where Beeler will use her abilities to once again help her team.

“We’re all excited to get this season started and to try to improve upon last season,” Christowski said. “I think we have a lot of talent and Heather will play a big role. It’s been a pleasure to have her over these last three years and hopefully this season will be her best yet.”