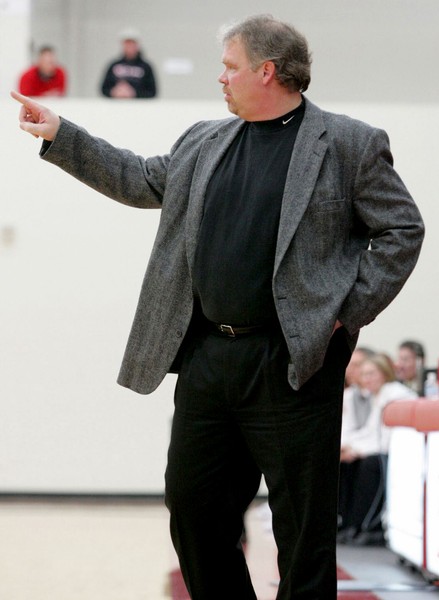 A very special season for the Simpson women’s basketball team came to an end on March 4, after losing to No. 21 Wisconsin-Stout 78-68 in the second round of the NCAA Tournament.

The team compiled an impressive conference record of 15-1 and an overall record of 23-4. After winning the Iowa Conference Championship and advancing to the second round of the NCAA Tournament for the first time in school history, Women’s Basketball Coach Brian Niemuth was named the 2005-06 Iowa Conference Coach of the Year, and also the Division III West Region Coach of the Year.

“It was a great season for us and I think coach was very deserving of the award,” Pearson said. “He is always very poised on the court and shows a great deal of respect to his players. I think it really shows in the success he’s had.”

This year marked the fifth team Niemuth has led to the Iowa Conference title and the fourth team he has led to the NCAA Tournament. This season’s 23 wins is second in school history, only to the 1998-99, 24-2 season, and makes Niemuth the coach of the second winningest program of any division in the state of Iowa since 1997, behind Iowa State University.

“I enjoy working with the quality student-athletes we have here at Simpson,” Niemuth said. “To establish and maintain a quality program takes a lot of work but the players make all the work worthwhile.”

Niemuth was a major reason why freshman Carrie Larson came to Simpson.

“The history he has at Simpson and the program he’s established here was a big reason I decided to come to Simpson,” Larson said. “He’s easy to talk to and I think a lot of the girls really like that about him. He was always really positive with us and I think that’s why we were such a good second-half team this season. He also makes the younger players more comfortable by telling us just to play our game and not think too much.”

Niemuth’s players and assistant coaches credit his success to his ability to motivate while maintaining composure as well as his ability to make his players want to be better student-athletes. His team in 2004-05 included six Academic All-Conference players – a school record.

“He has a certain approachability that helps everyone on the team,” said Jennifer Jepson, first-year assistant coach. “He exudes a lot of confidence and poise in everything he does and his players feed off of it. I was excited to work with him coming into this season and it definitely didn’t disappoint. If I decide to become a head coach some day, I hope to do a lot of the things Coach Niemuth does.”

Before Niemuth became a great coach, he was a decorated athlete. He was an All-Conference basketball player and honorable mention All-American baseball player at Park College in Kansas City, Mo. Prior to his arrival at Simpson, Niemuth served as an assistant coach at his alma mater for two years; one with both the men’s and women’s teams. He then was an assistant coach at Dallas Center-Grimes High School.

“I can’t say enough about what Coach Niemuth has meant to me and the rest of this year’s seniors,” Pearson said. “He’s been great to play for and I’m sure he’ll have a lot of success in the years to come.”

Niemuth said this was a special team this season because of the work these seniors have put in over the past four years.

“This team was special because they worked hard and deserved to enjoy their successes,” Niemuth said. “They embraced the new players and taught them how to compete hard every day. All five seniors contributed in their own way; Kara [DeNoon] and Kenie [Woodard] lettered four years and were good role players playing about 10 minutes a game during that span, Heather [Kay], Dana [Johnson] and Sarah [Pearson] started on JV and over the next three years worked their way into being some of the best players in the league. I think the seniors’ work ethic is how they will be remembered.”

Niemuth said he hopes to continue the winning tradition for next year.

“We lose the five seniors but we have a young but very talented group coming back [next year],” Niemuth said. “Our expectations will remain the same. We want to win the conference championship and tournament again, we just have to make sure our work ethic matches our goals.”