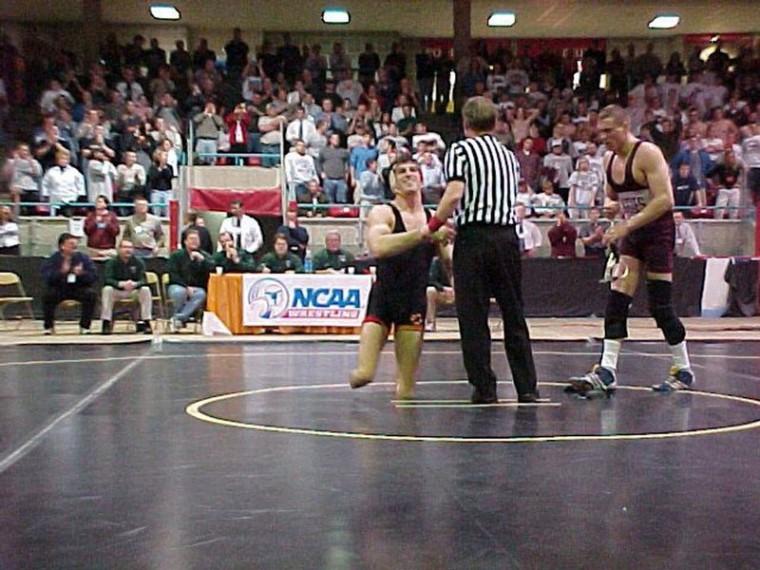 Nick Ackerman graduated from Simpson in 2001 as one of the school’s most successful wrestlers to ever step on the mat. Recently, his 2001 NCAA Division III Wrestling Championship was recognized as one of the organization’s “25 Defining Moments.”

As part of its celebration for the 100th anniversary of the NCAA, the “25 Defining Moments” was created to call attention to the benchmarks in NCAA history that have helped make the organization what it is today. Ackerman’s feat in 2001 was an upset in every sense of the word – one that happened nearly five years ago to the day.

In the 174-pound championship match, Ackerman faced Nick Slack of Augsburg College, a national wrestling powerhouse. Slack had won the championship the previous year and was the winner of 60 consecutive matches entering the showdown with Ackerman.

Ackerman defeated Slack 13-11 in a riveting match that left the crowd of 3,000 fans awe-struck. It was not only a memorable upset due to Ackerman’s sixth seed ranking or the fact that Ackerman had never even won an Iowa Conference title, but because Ackerman was not your average wrestler. When he was only 18-months old, Ackerman lost his legs from the knees down due to a severe case of bacterial meningitis.

“Looking at the other names and accomplishments that are part of the top 25,” Ackerman, a native of Colfax, said. “It’s definitely a huge honor to be mentioned on the same list.”

In addition to winning the 174-pound title, Ackerman was named the Outstanding Wrestler of the 2001 National Championships and shared the 2001 Hodge Award, which is similar to football’s Heisman Trophy, with Cael Sanderson of Iowa State. He has also since been named to the National Wrestling Hall of Fame in Stillwater, Okla.

“I can’t say enough about what Simpson College has done for me,” Ackerman said. “Without Coach Peterson, Ricky [Schweitzberger] and Matt Turk, along with everybody else, none of this ever would have happened.

Some might see Ackerman as disabled, but anyone who knows him knows that is far from the truth.

“The controversies and struggles that he went through gave him great determination and heart that were unbeatable at times,” Simpson wrestling coach Ron Peterson said. “He certainly was unbeatable that weekend at the national tournament, it was amazing.”

Ackerman had always been recognized for his efforts, but the accomplishments of his senior year surpassed everyone’s expectations. Everyone, that is, except himself.

“Before the first practice of his senior season,” Peterson said. “He announced to the team and to all of the coaches that he would be the national champion that year. It’s not that we didn’t believe him, we were just skeptical because he had never even been to the national tournament. His will and determination that season was really something to behold.”

Sports Information Director Matt Turk spearheaded the effort to spread the word about Ackerman’s special story that ended up getting him on “The Today Show” on May 18, 2001, the day before Ackerman’s graduation.

“I could leave Simpson tomorrow and be the sports information director at Duke for the rest of my career,” Turk said. “And Nick’s would still be the best story I could ever be a part of. I was very fortunate to work with and cover an athlete like him.”

Ackerman’s accomplishment, along with the other 24 NCAA defining moments will be produced and aired by ESPN as a part of the centennial celebration throughout 2006.

“It was a privilege to coach a kid like Nick,” Peterson said. “Lacking his legs never affected him and never slowed him down. Simpson College is lucky to be represented by such a fine athlete and young man.”