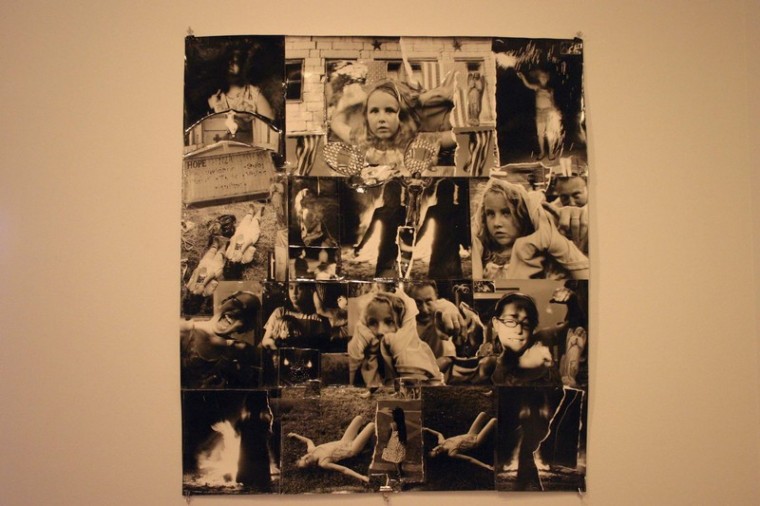 The new artwork being displayed in Farnham Galleries titled “Real People, Real Time: A Search for Truth in America” features the work of many artists throughout the country. The artwork depicts the condition of mass media in America and the impact media has on society.

“The art being displayed is art from a collection of artists who did pictures about the mass media in America,” said Justin Nostrala, assistant professor of art.

Many different artists were invited to participate in this exhibition. Much of their work includes an array of paintings, drawings, sculptures and photographs.

Some of the work clearly addresses the issue of mass media in America, while other pieces were abstract.

David Richmond, associate professor of art, explained what some of the artwork means to him.

“It’s about the media and how we are influenced by it,” Richmond said.

Nostrala was responsible for getting the artwork together and also putting some of his work into the exhibition.

“I wanted to have an exhibit on this topic,” Nostrala said. “I had the idea to have many artists make work to address this idea.”

An exhibit “To the prettiest one” by Rob Stephens shows a red painted tank truck – a tank that would be used in war times – on one of the walls in the gallery. Red paint is splattered on the wall and it has dried dripping down to the floor.

There are many images of war, but there is also artwork created from other mass media mediums.

One exhibit displays clippings of major headlines from newspapers arranged on the wall in a black and white checkerboard fashion. It is titled “Political Chess” by John Stanko.

“Oh Say, Can You See” by Sandra Dyas also features newspaper clippings, but they are of people. The clippings are arranged in a collage and depict the many emotions of people.

Nostrala’s work, “The Sum of All Media,” is about how the media is geared toward the public.

“It has a sense about it in forms of advertising,” Nostrala said. “With the way the war in Iraq is presented, Americans are led to believe that we are the most important country in the world and this problem doesn’t promote global compassions.”

“Form Follows Function” by Stephens is an example of what transparent paper can do to art.

Sophomore Krystal Berger, who is an art major, said the artwork displayed is different and interesting.

“It’s interesting that there are so many different ways to show a single idea,” Berger said. “It’s nice to look at some artwork that isn’t necessarily ‘pretty.’ This artwork actually has a message and that’s why it’s interesting to look at and think about.”

This exhibition is different from others in the past because it’s not just one artist being featured.

“It’s a collection of artists,” Nostrala said. “But they are commenting on the same subject.”

Nostrala said the different artists were asked to take a more intellectual look at art rather than their normal heartfelt look.

“A lot of different work is being made by the artists and these artists usually don’t make this kind of work on a regular basis on this sort of topic so they had to step out outside the artwork they usually make and comment on this specific topic,” Nostrala said.

The exhibition will be on display until the end of March with a closing reception on Thursday, March 23 at 6 p.m. in Farnham Galleries.