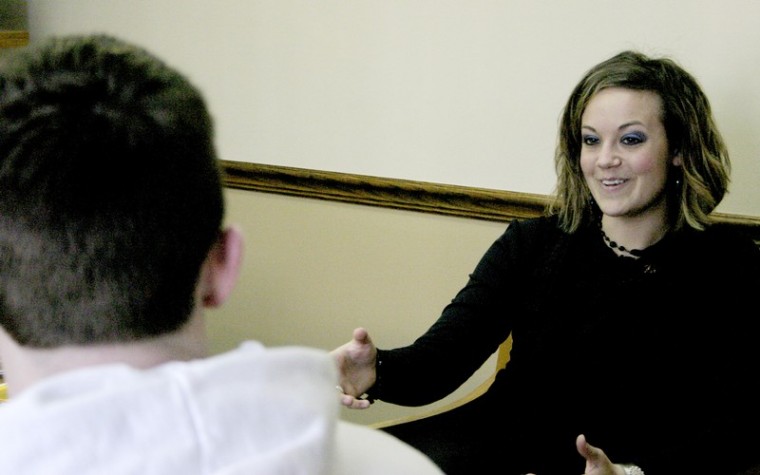 Simpson’s admissions counselor’s know the college like the back of their hands. They’re so familiar with the college because they donned the red and gold and graduated from Simpson.

According to Peck, this is not something one would see in admissions at a number of other private schools.

Zimmerman has been working at Simpson since he graduated in 1976. In his time here he has seen Simpson change in many ways and in his way of thinking, for the better.

“Whole buildings have been added since I’ve been here,” Zimmerman said.

One thing that the counselors had in common is they were all very passionate about selling Simpson to perspective students. They had the time of their lives here and they enjoy being a part of the decision students have to make in choosing a college.

“I think to be a good salesperson you have to believe in your product and Simpson has never let me down,” Zimmerman said.

Another aspect of the job that seems to be a tremendous advantage is the counselors can use their own experiences to help convince their recruits Simpson is the college for them. According to Zimmerman, Peck and Hummel, it’s much easier to sell something when you know more about it.

Hummel and Peck did not come back to Simpson right away. Hummel chose to teach in Johnston after graduation and Peck took on a management job. Even though they enjoyed their jobs, they found their way back to Simpson.

“I always thought it’d be great to come back and work here,” Peck said.

Hummel knew she wanted to stay in the education field, but was not happy with the way things were going at her teaching job, so when she saw the opening at Simpson, she jumped at the chance.

“I have a passion for telling students and families what Simpson has to offer,” Hummel said.

One thing all the counselors seem to agree on is there’s never a dull moment in their jobs. Peck said every day is exciting and brings something new to the table, whether it be traveling or sitting in the office making phone calls.

“One thing that is exciting about this job is that no two days are alike,” Peck said.

The three unanimously believe Simpson’s best attribute is the strong sense of community it gives off.

“It really is as good as it looks,” Peck said.

However, like any other job, being an admissions counselor at a private college does have a few setbacks. For instance, there’s always going to be the recruits that say no.

“That is by far the most devastating part of the job,” Peck said.

Many times counselors devote a huge amount of time and energy into these recruits. Whether it be calling, visiting, writing letters or helping with paperwork, only to see the student choose a different school in the end.

“That just kills me, even after all these years,” Zimmerman said.

They do, however, take a tremendous amount of pride in the students they do convince to come here. They enjoy seeing their recruits succeeding here on campus whether it is in academics, sports or even reporting for the newspaper, according to Peck.

“I take a lot of pride in saying, ‘I helped that student choose Simpson’,” Peck said.