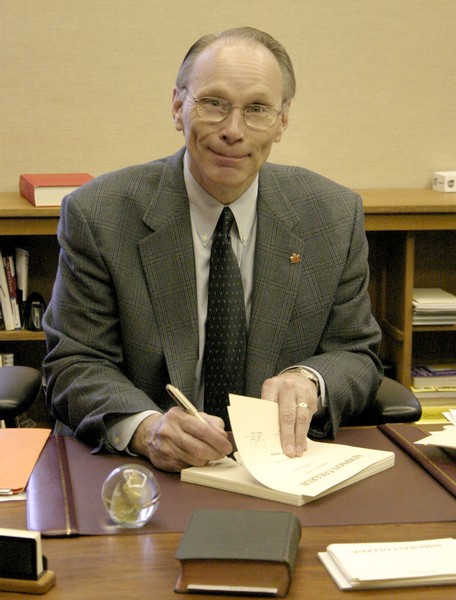 President John W. Byrd will be inaugurated tomorrow at 1:30 p.m. as the 22nd president of Simpson College at the First United Methodist Church in Indianola.

According to Jim Thorius, vice president and dean for student development, many colleges across America have a long-standing tradition of inaugurating each new president.

“The ceremony symbolizes and invests the president with the power and capacity of the office,” Thorius said. “It reminds the community of who they are and its connection to the past and goals of the future.”

Byrd’s actual inauguration ceremony is only expected to last around 30 minutes, but the college has planned several other events to celebrate it. There was a student dinner last night in Great Hall followed by a student worship service in Smith Chapel.

Tomorrow will be the inauguration ceremony with a luncheon for guests, as well as a recital by Theodore Green, a 1995 Simpson graduate, at 8 p.m.

Byrd said the events are appropriate ways to celebrate his formal commitment to Simpson.

“I think we have tried to capture the purpose of the ceremony in our theme, Celebrating Simpson,” he said. “The inauguration is a ceremonial opportunity to mark the beginning in new leadership.”

Byrd said he has played a minor role in the planning stages of the events – most of the work has been done by an inauguration committee made up of 10 to 15 people. The committee, which has coordinated all the events that surround the inauguration, is made up of faculty, staff and one student – senior Kaela Phillips.

Phillips, student body vice president and Student Government Association president, said being part of the committee has been worth it.

“I’m excited for it,” she said. “It’s the first time I have ever heard of [a college president’s inauguration].”

According to Phillips, the inauguration is a way for Byrd to show his commitment and his “vested interest in the college – where he is [symbolically] married to the institution.”

“I think it’s going very well,” Byrd said. “There is a lot of excitement built for the ceremony, and they have done a good job.”

According to Thorius, it’s not unusual for the inauguration of the new president to happen after he has acted as the president of the college for some time.

“It’s normal for the inauguration to be held anytime during the first year of the new president’s term,” Thorius said. “Many colleges across the nation take part in this tradition.”

Byrd and the planning committee are expecting the turnout for the inauguration ceremony to be high.

“The church’s capacity is about 500 people, so I think we’ll make it somewhere right around there,” Byrd said. “Friends and family will be there, delegates from 52 other colleges are planning on attending, as well as some presidents from other universities.”

However, while Phillips knows the inauguration will attract plenty of viewers, she isn’t sure the student body will make up a large percentage of the crowd.

“I think there will be some students there,” Phillips said. “But some students don’t care – those who usually don’t participate overall. I think it will be seen as an extra half-day for some.”