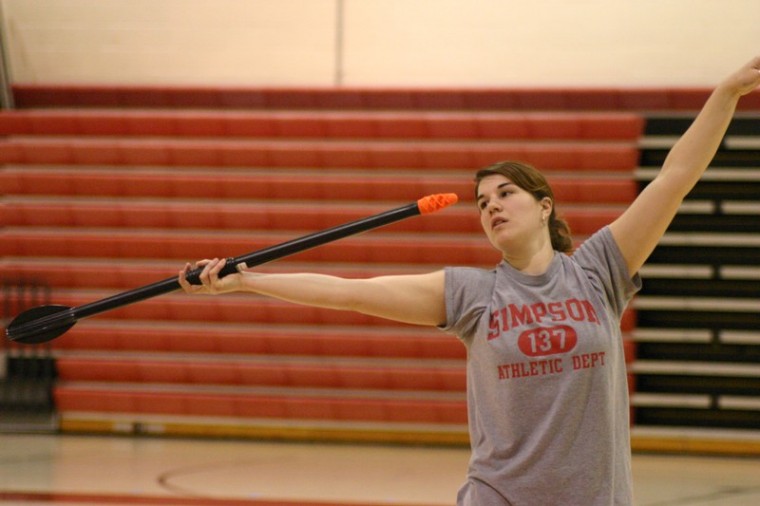 As Simpson’s track and field teams begin their outdoor season, senior Caroline Capper has some goals and expectations she may not have had a year ago. The indoor season, which ended on March 11, saw Capper succeed past her own expectations.

Setting personal record after personal record, she ended the season by becoming Simpson’s first track and field athlete to earn All-American honors at the NCAA Division III Indoor Track and Field Championships since 1993.

Capper’s weight throw of 52-2 3/4 placed her eighth in the standings and gave the Storm enough points to tie for 50th in the overall standings.

“The indoor season was very fulfilling for me,” Capper said. “I exceeded my expectations and it was definitely a pleasant surprise.”

First year coach Dave Cleveland has enjoyed having Capper on the squad and sees her as an unofficial assistant coach at times.

“Being a senior, she emerged right away as a team leader,” Cleveland said. “She’s very self-motivated and has a strong will to win. Athletes that are as proactive as Caroline and have a ‘take charge’ kind of attitude are the kind of athletes you really like to coach.”

Capper gives a great deal of credit to her coaches.

“I think Coach Cleveland has been a great addition to the program,” Capper said. “Also, the help of our new throwing coach he hired, Joe Shaner, has allowed me to see a breakthrough in my potential and has me really looking forward to the outdoor season.”

Capper says the indoor season was a building experience for the team and that they have the potential to improve greatly.

“The indoor season is so short and a lot of our girls don’t have the experience in the indoor season that they have for the outdoor season,” Capper said. “I think we should be very competitive in the conference this season.”

As far as personal goals are concerned, Capper hopes to compete with the best in the conference in the outdoor shot put and javelin, and hopes to increase the conference record she already holds in the hammer throw. Capper’s teammates are confident that she will achieve her goals.

“Caroline is a fierce competitor and is definitely a team leader,” sophomore Emily Salberg said. “As one of the many underclassmen on the team, I think she does a good job of showing us what it takes to be successful.”

Cleveland values Capper’s presence not only for her individual aspirations but for what she does for the team.

“Caroline is a student of the sport and is very goal oriented,” Cleveland said. “It’s great for the rest of the team when we have someone that competes so well on the conference and national stage. It’s not her performance either; I think she’s fun to be around for our other athletes. It should be a fun outdoor season.”

As Capper’s career comes to close this spring, she agrees that it should be fun, but knows that success will make it even more rewarding.

“I have really enjoyed the last few years in this program,” Capper said. “The improvements I’ve made have been very fulfilling but the relationships I’ve had with my teammates and the time I’ve spent with them has been great.”