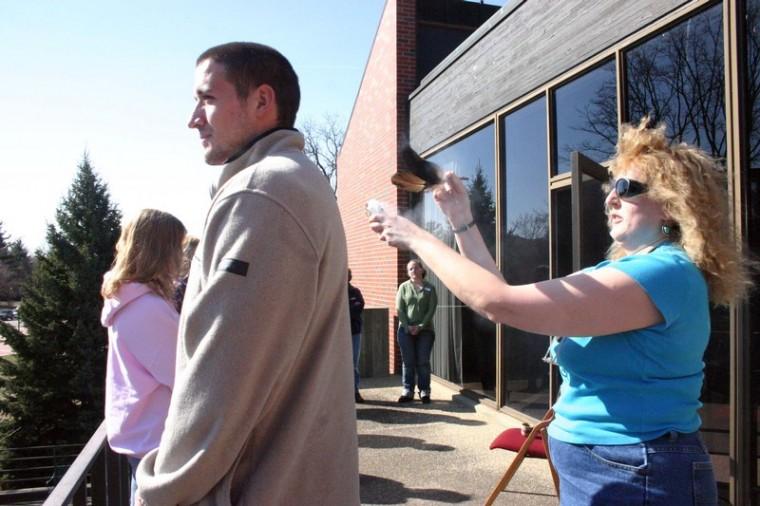 Animal communicator Karen Craft came to Simpson last Sunday to talk about her profession, credentials and to perform pet readings.

“There’s no science to it and it is completely irrational, but interesting,” said Steve Emerman, associate professor of geology.

Though the practice has its critics, something as simple as owners loving their pets may be what attracts people to the idea of animal communication.

Craft, acknowledges how important humans’ animals are to them and just how much pets help their owners in their daily lives.

As an animal communicator, Craft believes all animals have a telepathic ability to express their feelings. She says she is able to understand an animal’s feelings and relate them back to their owner.

According to Craft, through this connection, owners are able to gain insight into their animal companions, negotiate solutions to problems with their animals, uncover clues about physical, emotional or behavioral problems and pose questions to their animal friends.

Craft believes all these things are possible and does consultations with animals on a regular basis. She also says she makes it very easy for any animal to communicate with its owner through her.

“Telephone consultation is the typical method for my animal communication readings; it isn’t necessary for the animals and me to be together,” Craft said. “I contact the animals via your heart connection to them.”

This makes learning what a pet has to say, or what has gone wrong with a pet, simple and personal.

According to Craft, there is a belief that all humans are able to communicate with animals on some level, but much practice and development is needed in order to have a personal bond with animals like hers. She sees animals as her guidance and she has pursued a career through this bond.

Craft is certified as a shamanic breathwork facilitator and healing arts practitioner. She is also a Shamanic Reiki Master.

According to Craft, her training enables her to hold a deeper connection with animals and understand their language on a much higher level.

Many Simpson students have already had the privilege of experiencing Craft’s connection with animals.

As part of Emerman’s Senior Colloquium, Blessing the Animals, students attended a workshop on March 26 where Craft explained what she does and how she does it. The workshop was also open to the public.

“I think she is incredibly brave for taking on such a metaphysical new-age obsession that a lot of people don’t understand or have respect for,” Minnihan said.

Minnihan, new to animal communication, was excited she was able to participate in the workshop.

“I was able to do a reading for an eight-year-old bunny,” Minnihan said. “I was skeptical at first, but I just followed what she [Craft] said to do and it worked. It was kind of amazing.”

Minnihan was impressed with Craft and her presentation.

“Craft is wonderful, intuitive and really loves what she does,” Minnihan said.

According to Craft, the possibilities of animal communication are virtually endless. Through an animal’s telepathic ability, their message is being spread by Craft and other communicators.

“As a sheep of my acquaintance once put it, ‘Why do you think only humans talk?,'” Craft said. “The animals are patiently waiting for us to rediscover the universal language of telepathy.”

Craft encourages all humans to communicate and listen to their animals. She also encourages humans to explore the wide world of telepathy.

“Telepathic animal communication can open a new world of insight into your companions’ actions,” Craft said.