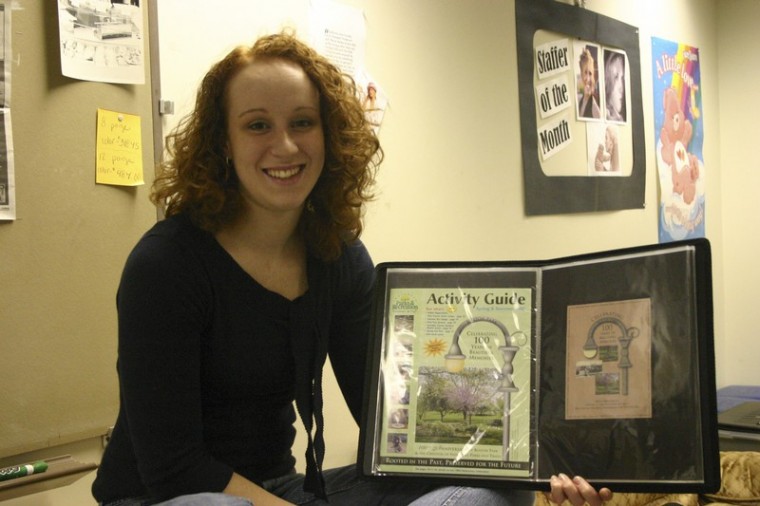 Junior Jenna DeDecker’s logo has been selected by the Indianola Parks and Recreation Department for the 100th anniversary of Buxton Park.

DeDecker decided to enter after the department sent an e-mail asking for submissions. The e-mail offered some guidelines, but DeDecker said it was also open to designers’ creativity.

The Indianola Parks and Recreation Department was looking for a logo that represents Buxton Park and relates to the slogan “Celebrating 100 years of beautiful memories rooted in the past, present and into the future.”

The logo will be used for the anniversary on July 15 in Buxton Park.

There was a total of four designs submitted, two of which were DeDecker’s.

“I entered because I thought they would be portfolio pieces to show for possible jobs or internships,” DeDecker said.

According to Glen Cowan, Indianola Parks and Recreation director, there was a volunteer committee of 14 people who looked over the designs submitted.

“I think they liked the period lighting in the logo,” Cowan said. “It looked like the lights in Buxton, so it tied in well.”

DeDecker’s winning logo has all the names of the Indianola parks on it, and it’s stylized like a lamp post.

She said the winning piece took her a total of two to three hours to design, but after the committee chose it they had her make some revisions that took some additional time.

“I think it [her success] is wonderful,” Richmond said. “She is a talented designer with ambition and I love when my graphic designers succeed.”

Sophomore Brady Buresh has not seen the logo yet, but thought it was a good idea.

“I hope it gets shown around quite a bit, so other Simpson students have the chance to see it,” Buresh said.

The Parks and Recreation Department plans on using her logo in its publications and on T-shirts.

DeDecker is honored to have been selected. She’s surprised her work was chosen as a student.

“It’s really encouraging to know someone approves of my work,” DeDecker said. “It is exciting to get real-world experience.”

Richmond believes through DeDecker’s success, the Simpson and Indianola communities are connected.

“Simpson and the city of Indianola are deeply intertwined and her logo keeps developing our relationship,” Richmond said. “Students use the park a lot, so the logo is a good way to give back to the community.”