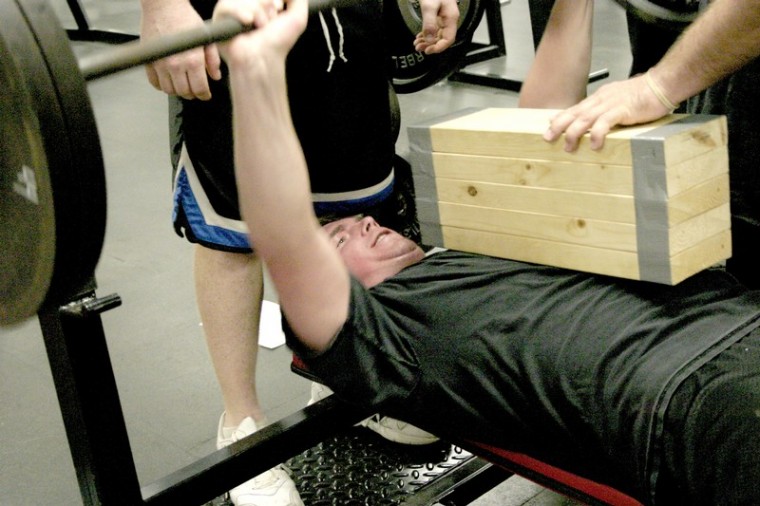 Some people may consider the offseason a time to rest and relax; however, many Simpson athletes take the opportunity to continue to workout and improve for the upcoming season.

Because they lack the excitement of big games and cheering crowds, the months spent off the field or track or out of the gym may not seem as glorious as the regular season. While it may be true that victories and defeats take place during the season, it is often the work ethic of the offseason that determines which of the two it will be.

Justin Snyder, strength and conditioning coach, is in charge of preparing and implementing programs for Simpson’s athletes. He is currently working with the football, volleyball, women’s and men’s soccer, wrestling and women’s basketball teams.

Throughout the offseason he has the teams work on speed, agility, flexibility, strength, power, conditioning, plyometrics and torso work. According to him, there are a couple dangers and disadvantages for athletes who do not stay in shape during the offseason.

“First, an increase in injury potential is a big thing,” Snyder said. “Next, as more and more athletes train harder, you have to get better if you want to be in the starting lineup. You have to train hard to keep up with your teammates and with the other competition.”

According to both coaches and athletes, the difference between those who worked hard and those who did not is noticeable. Individuals and teams can enjoy great success when they make the commitment to get better and increase their skills.

“The players that end up doing the best job and getting those postseason accolades are the ones who do the work,” Men’s Basketball Coach Bruce Wilson said. “The more they put into it, the more they get out of it.”

The women’s basketball team had a very successful year making it to the second round of the NCAA Division III National Tournament. Their team has shown the drive in the offseason to work hard and get better.

“Simpson women’s basketball has been a successful program for many years and part of that success is due to the hard work that everyone puts into the offseason,” junior Tessa Van Oosbree said. “When we show up for practice next October, you will be able to see who worked in the offseason and who hasn’t been in the gym, weightroom or touched a ball.”

Even with all of the benefits the offseason provides, including more time to participate in other activities, there are some drawbacks.

“I don’t like not being able to play games and having to wake up early every morning,” sophomore Bill Nelson said.

According to Van Oosbree, the toughest thing about the offseason is not seeing the other girls every day. When they do get together, it is usually only for an hour, which is devoted to working on basketball.

The athletes are not the only ones dedicated to working hard in the offseason. All of the workout programs done by the athletes would not be possible without the help of the strength and conditioning staff.

“I greatly appreciate my interns and all the hard work they do,” Snyder said. “It allows us to individualize our program and take it to a whole new level.”