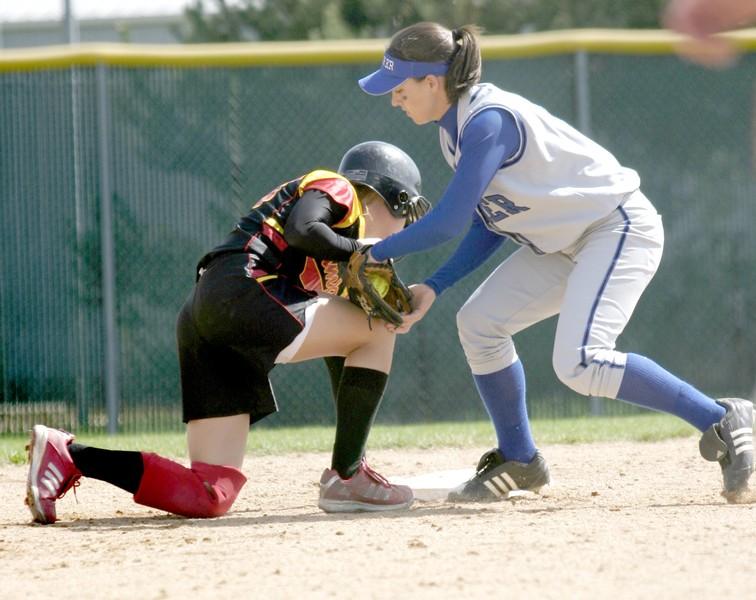 Simpson’s softball team split a doubleheader with Luther on Saturday, April 8, in Indianola. After a pair of wins at Dubuque the following day, Simpson has an overall record of 19-8 and a conference record of 3-3.

The Storm won game one of the double-header against Luther, 4-0. Junior Jacey Stephens gave Simpson a 1-0 lead when she drove in senior Heather Beeler with a single.

The Storm added three runs in the bottom of the sixth inning, highlighted by a double by junior Allison Erichsen scoring freshman Anna Braner and junior Jill Mitchell.

Senior pitcher Bradi Smith threw a three-hitter as she picked up her third shutout of the season. Stephens had two of Simpson’s six hits with a 2-for-3 effort, and Beeler stole one base.

Simpson fell to the Norse, losing 3-2 in the second game that went eight innings. The Storm trailed 2-0 before a Mitchell single drove in Erichsen in the fifth inning.

Simpson then tied the game in the bottom of the seventh on Mitchell’s sacrifice fly, plating Beeler.

Luther scored a run in the top of the eighth inning that Simpson was unable to match, bringing an end to the night.

Erichsen said after the split against Luther, the team needs to step it up a notch.

“The games against Luther were one great win and a tough loss,” Erichsen said. “We are now at that point in our season where we need to kick it into gear and I think we are going to do that. Its been a rough road, but we are learning and I think it’s going to help us in the long run.”

The Storm out hit the Norse 9-6, led by Beeler who had three hits, going 3-for-4. Beeler also stole a base, as did freshman Megan Doty.

With the excruciating loss to Luther behind them, the Storm softball team is ready to move on and prepare for their next game.

“Despite the loss, our team is choosing to remain focused on the road ahead,” Beeler said. “We still plan on doing big things, and I have tremendous confidence that our team will get to where we want to be. I think we are all on the same page as far as focus and dedication goes, and that’s half the battle.”

The Storm will travel to Cornell on Saturday to take on the Rams and will host Buena Vista on April 19.

Smith said these next few games are big for the team.

“The games aren’t all falling in our favor right now, but everyone is keeping a positive attitude and giving 100 percent,” Smith said. “It was tough to come off the loss, but we got two big wins the next day and looking for big things [this coming week].”