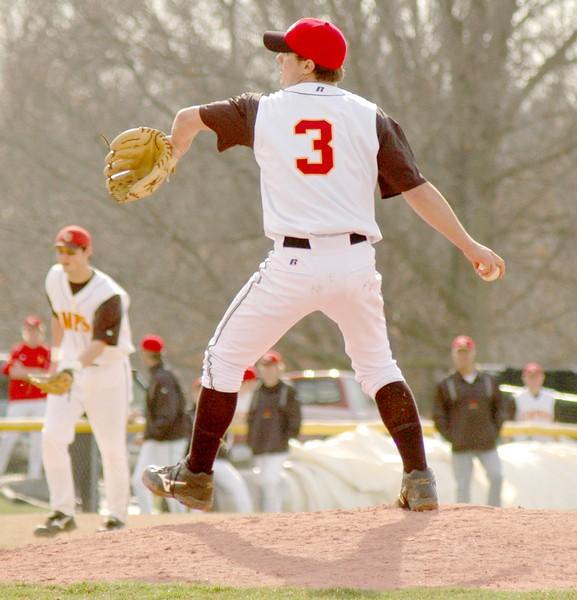 The Simpson baseball team came away with a sweep after playing Luther in a double-header at home on Saturday.

The first game was a nail-biter going into extra innings. As the Storm began its final at-bat in the bottom of the 10th inning, Luther was leading 6-5. With two outs, senior Dusty Kain stepped up to the plate, hammering out a home run and tying the game at six.

Senior James Brown followed suit, hitting a home run over right field and winning the game for the Storm, 7-6.

Coach John Sirianni described the excitement and the relief that came with the first win as fabulous and elating.

“The end of the first game, in the 10th inning, we were down by one, two outs, no balls, two strikes and to end up winning was maybe a little shock,” Sirianni said. “I was elated. It was fabulous. Those kids did a great job and never quit, that’s for sure.”

Senior Jon Clanton had three hits, while Kain and Cyronek each had two RBIs.

Junior Chad Scieszinski stepped up as the main pitcher for the Storm, pitching over five innings, allowing only five hits, one run and walking one.

“Scieszinski really stepped up,” Wieck said. “There were also those bombers by Brown and Kain.”

The second game against Luther was just as nerve-racking as the first. The Storm started out energized with a home run hit by Clanton bringing in both Anderson and himself to score in the first inning. The score was tied at two from the top of the third until the bottom of the sixth, when a double-steal scored Kain. Clanton scored the final run for the Storm on a wild pitch, giving the Storm a 4-2 win.

Sirianni’s enthusiasm about winning the first game was increased as the team walked away with the sweep.

“After the emotional rollercoaster we had in the first game, and the tight game in the second one, it was 2-2 in the sixth, we were able to execute the little things and come away with the sweep,” Sirianni said. “It was extremely gratifying.”

The second game had Clanton leading the team with two runs, while Anderson and Kain both recorded one run apiece. Clanton also chalked up two RBIs.

Wieck said while the team may not have played as well as they could have, it was still great to walk away with the sweep.

“We didn’t play well,” Wieck said. “But it was still really nice to come away with the wins…it was a good game to get under our belt as conference begins.”

As the Storm’s season record climbs to 10-2 overall and 2-0 in the Iowa Conference, Sirianni disagreed with Wieck, and expressed how proud he is of his players.

“I was extremely pleased with the way the kids played,” Sirianni said. “The concentration and intensity and the ability to deal with adversity, they did a really, really good job.”