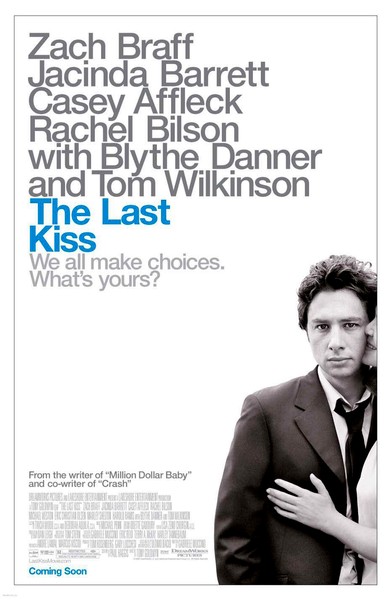 “The Last Kiss” comes to us from writing Oscar Nominee Paul Haggis who wrote “Million Dollar Baby” and “Crash.” The director. Tony Goldwyn. is more commonly known as an actor in movies such as “Ghost” and has helped direct television episodes such as “The L Word” and “Grey’s Anatomy.” “The Last Kiss” tells the story of Michael (Zach Braff; “Garden State” and TV’s “Scrubs”), an almost 30-year -old architect who faces the blunt reality of a “set lifestyle” in which he feels no surprises remain. His perfect girlfriend, Jenna (Jacinda Barrett, “Ladder 49”), is madly in love with him and ready to commit, only adding to Michael’s anxieties about the future, causing him to stray to Kim (Rachel Bilson, TV’s “O.C.”). However, Michael’s relationship isn’t the only one with problems. Chris (Casey Affleck, “Oceans 11″ series”) is unhappy with his wife’s controlling ways and can no longer take the abuse. Izzy ( Michael Weston, “Garden State”) is an emotional wreck over the loss of the love of his life. Meanwhile, Kenny’s (Eric Christian Olson, “Dumb and Dumberer” and”, “BeerFest”) life couldn’t be better in his eyes. The drama comes full circle when with Jenna’s parents (Blythe Danner, “Meet the Parents”, “Meet the Fockers” and Tom Wilkinson, “The Full Monty”) begin facing their own marital problems after 30 years together.

The movie’s main focus is on the seemingly perfect relationship between Michael and Jenna which slowly unravels when he encounters Kim, a much younger, free spirited, girl who makes Michael question his future with Jenna. Random moments bring us back to the other storylines in the movie, but they don’t cause distraction from our focus on Michael’s issues.

“The Last Kiss” reminds us of our own past and current relationships and forces us to think about their importance in our lives. The movie also provides moments of humor but most of these are found within the first half hour of the film. “Sexually explicit” scenes are found throughout the movie along with adult language and thematic elements, giving it an “R” rating from the MPAA. A modern day soundtrack with artists such as Snow Patrol, Coldplay and Fiona Apple accompany the humorous and dramatic scenes.

Zach Braff does a good job in this film and shows his comedic and dramatic acting abilities. Blythe Danner also gives an amazing performance in both aspects, playing the role of a conflicted mother and wife. Jacinda Barrett displays her dramatic acting abilities, making the fight scenes between her and Braff raw and intense. Overall, the well rounded cast turns in a noteworthy performance.

Currently, “The Last Kiss” is showing at Southridge 12, Century 21 at Jordan Creek Town Center, Wynnsong 16 in Johnston and Cobblestone 9 in Urbandale. Unfortunately, Paramount Theatre in Indianola is not showing it at this time. The movie runs 104 minutes, but with the 20-minute previews, expect to be there for about two hours.

If you’re looking for a movie with emotional highs and lows, “The Last Kiss” is a must see film. If you want to go to a good date movie, this could possibly be the worst choice, because of the storyline involved. You will leave the film wanting to know the future of the characters and how their relationships pan out.