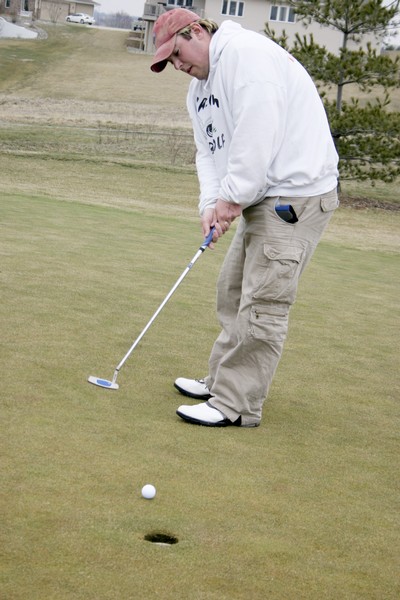 We were all reminded of life’s fragility this past summer, as a life that was just taking shape ended abruptly.

On July 7, sophomore Cory Lemke, an emerging athlete on the Simpson golf team from Sheldon, Iowa was on his way to Hull for a car show, when his motorcycle collided with a van, killing him instantly.

After the accident, Lemke’s father, Mark Lemke, wrote a letter about his son to “Sports Illustrated” writer Rick Reilly. Reilly chose to write an article about Cory Lemke for a section titled “Faces in the Crowd” in the August issue of “Sports Illustrated.”

“I was astonished, happy and amazed he [Reilly] took the time to put it in an article,” Mark Lemke said. “I’m very proud.”

Cory Lemke started playing golf by the age of four with his father and began playing on junior tours shortly after.

“As far as I know, it was a big part of his life,” Mark Lemke said. “He loved to play in competition. Golf was part of his personality and he had a flaming golf ball tattoo on his calf.”

Mark Lemke is glad his son had the chance to attend Simpson.

“I just want Simpson to know I appreciate them for letting Cory play golf, go to school and make new friends,” he said.

Mark Lemke said there was an award named after his son at the World Amateur Golf Tournament in Myrtle Beach, North Carolina.

Simpson’s golf team has recognized and remembered their teammate and friend this season. The team shirts have Cory Lemke’s name on the sleeve. Sophomore Jeffrey Sailer said the team also sent both parents a shirt.

“I think it was a good idea,” Sailer said. “(Junior) Cody Scharf even has his name written on his head cover and shoes.”

Last year, Cory Lemke was chosen by his teammates as “Newcomer of the Year”. Sailer claims Cory Lemke worked hard by playing extra holes during practice or hitting extra balls on the driving range.

“He was one of our best players on the team,” Sailer said. “Everyone got along with him.”

Sailer also knew Lemke and his father were good friends.

“He was always talking to his dad on the phone,” he said.

According to Reilly’s article, Lemke played golf with his father almost every day he could.

Sailer recalled that the first time he met Lemke was the first night on campus during a dorm meeting. The next morning they were playing golf together.

Simpson’s golf coach, Larry Shoop, said Lemke was one of their leading scorers and was very instrumental in their play.

“He had the ability to score from anywhere,” Shoop said. “He was very dominating and he was always in the hunt.”

Lemke’s dedication to golf only began to display his personality, as his friends described him as fun-loving, energetic, outgoing and spontaneous.

According to Henderson, he could make everyone laugh.

“When he walked in, he would always brighten up the room,” Henderson said.

Sophomore Sadie Bartling, who was a close friend of Cory Lemke, can remember times when he would call her at 2 a.m., telling her he was on the Minnesota border.

Henderson has many of these same memories of his late friend.

“Late at night we would jump in Cory’s red Explorer and drive to surrounding states and just talk about life,” Henderson said. “We did it three or four times last year.”

Henderson said Lemke taught him to enjoy life without worrying about the little things.

Simpson is planning to remember and honor Cory with a memorial service Oct. 19, and a tree will be planted in his honor at a later date.

“He accomplished a lot more things than most people do in their entire life,” Bartling said. “We want to put a collage of pictures together, have speakers, hymns and prayers. Anyone is welcome to come.”