Welcome to the Jungle: 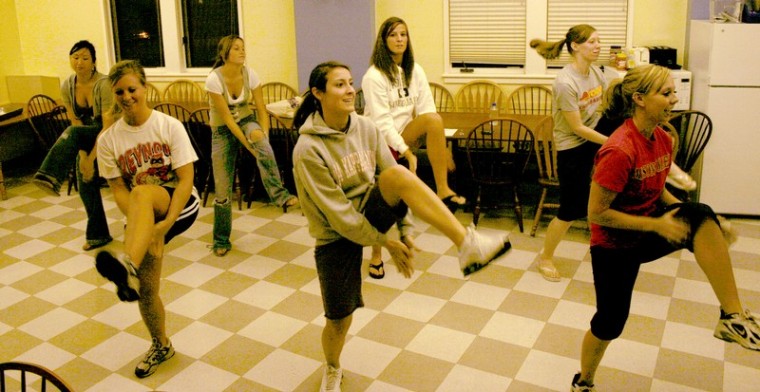 Campus decorating, king and queen elections, a dance and kick-off night with a bonfire are some of the activities that have pumped up students with school spirit. This year, some traditions have been changed, and participants can look forward to potential prizes for winners of contests including board painting and campus decorating.

“Results of the winners from the week’s competition, both individual as well as group winners will be announced at the game,” said Kathy Dierking, cheer squad captain and homecoming chair. “Awards this year will be a big trophy and we’ve spent over $200. The Homecoming Court will also be introduced at the game.”

Those in charge of organizing the events hope that this year’s activities will provide plenty of involvement outside of the big game.

The activities continue tonight at 8 p.m. with a skit competition held in Great Hall. Friday, Simpson Olympics will be held on the Intramural Field at 4:30 p.m., and Yell Like Hell will take place at 8 p.m. in Hopper.

Homecoming day will start with a pre-party celebration tailgate. Kick-off for the game is at 1 p.m. The day’s activities end with a dance with a cash bar for those of age.

“The idea for a Homecoming dance originated within a Buxton/Picken/Worth staff meeting,” said Luke Behaunek, area coordinator for the Buxton/Picken/Worth area and theme houses. “We decided to have the cash bar to promote a responsible and legal option for our upper-class students to consume alcohol.

The area where students may purchase and consume alcohol will be separate from the dance floor, and only students and guests that are 21 or older will be able to enter this area,” Behaunek said.

The dance, being held on Saturday night, is semi-formal and lasts from 10:30 p.m. – 1 a.m. There will be a DJ and free pop and snacks. A $1 admittance fee will go to charity.

“The dance idea originally started as a charity fundraiser,” Behaunek said. “We’ve decided to charge $1 for admission, all of which will be donated to Oakridge’s Youth Education Program.”

The numerous activities offered this year are an attempt to provide a variety of activities for people tied to Simpson.

“Homecoming is this notion that you bring the community together,” Ramos said. “Alumni, staff and students, it brings Simpson back together as a group.”

Yet another reason behind this year’s activities is to encourage enthusiasm among the student body.

“There’s lots of things that people can attend that will boost school spirit,” Dierking said. “I encourage people to take a more active roll in Homecoming; to make Homecoming not just another game.”

This year, Simpson cheerleaders, Storm Chasers and Homecoming chairs (Dierking and junior Zach Rus) have worked with a number of faculty to make some changes to the old traditions.

“I’m really excited,” Dierking said. “Simpson has been doing the same thing over and over again, so people started to get bored. The changes will hopefully entice students to play a more active role in Homecoming.”

Members of the cheer squard have been encouraged by administration to increase school spirit.

“We’ve had interest from President Byrd, the dean and athletic department about getting school spirit up and having more people participate,” said junior Sheena Smitley, captain of cheer squad “I think the thing that surprises me is that there are seniors that didn’t even know we had a fight song, so that gives us motivation.”

In preparation for Saturday’s big game, the words to the fight song are posted around campus.

“There are over 300 signs around campus, in every building, with the words to the song, as well as e-mails that have been sent with the words and music,” Smitely said.

According to Smitley, the team has worked hard to boost interest, the change in support isn’t going to happen overnight. She encourages people to go to the Homecoming events.

“It’s a chance to meet people, have fun and a chance to get involved, that’s part of what makes Simpson, Simpson,” Smitley said.