Simpson coach returns to his roots 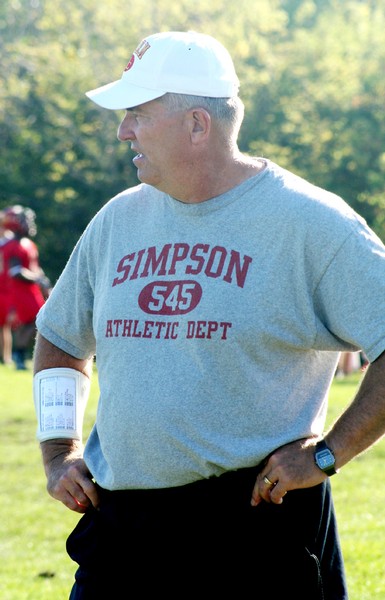 Some people leave Simpson and can’t wait to return. Paul Lounsberry, a Simpson alum, is back to coach as the football team’s new offensive coordinator.

“Simpson is my college, and I believe in it (and) enjoyed my time here,” Lounsberry said. “And my mother only lives an hour away.”

Lounsberry started out at Florida as a graduate assistant, then went on to coach at Central Florida, South Carolina and Temple where he was an offensive line coach. According to Lounsberry, he designs and coordinates the offensive plays, watches videos to evaluate, works with quarterbacks on their skills and recruits new athletes. While at Central Florida, he recruited Daunte Culpepper, who is now an NFL quarterback.

Lounsberry said the team has been working hard and is improving every week. Though his methods were new to the players, they continue to improve every week.

“Our philosophy is to be the most physical and efficient football team,” Lounsberry said. “We want to teach the fundamentals of each position.”

Freshman Tyson Unkrich said Lounsberry has helped him with his fundamentals.

“His plays are all new to us, but the team has adapted and now we are coming along, because we have a feel for the style of offense now,” Unkrich said.

Lounsberry believes it’s possible to win each game from now on as long as the players do everything necessary as a team to win.

“We want to reduce turnovers, penalties and improve third down percentage,” Lounsberry said. “Doing these things will help our scoring.”

Lounsberry said he was happy for the players and other coaches with their first win of the season. According to Lounsberry, the coaches work 14-hour days during the week, while the players invest a lot of time into improving their skills.

“I was glad to see improvement being shown on the scoreboard,” Lounsberry said.

The first play of the game was an 83-yard trick play, which was a fake reverse pass called by Lounsberry. According to Lounsberry, the team has a number of trick plays.After the team anticipated a blitz, Lounsberry figured the opposition was excited and juiced up to come after them. It was well executed by the players, after the coaches planned it all week.

“It was fun to see played out,” Lounsberry said. “It was a beautiful thing. We wanted to establish dominance by putting the other team on their heels.”

Jay Niemann, Simpson’s head football coach, said the team has responded to Lounsberry incredibly well because he is a solid coach, they respect his background and they simply enjoy him.

“He is a top notch character,” Niemann said. “(He has) great work ethic, lots of knowledge and experience, and he has a passion for football and the team because he was a Simpson graduate.”