How to… Defend yourself 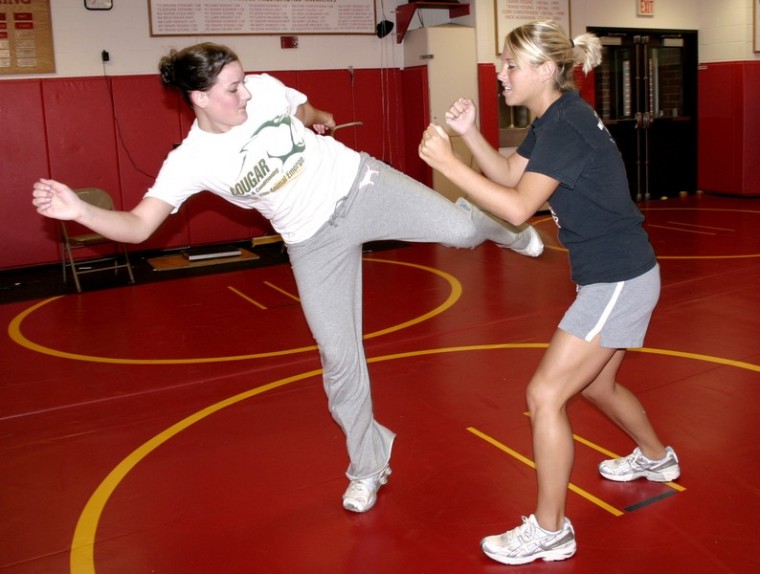 You’ve all heard the story: pretty girl walks through dark alley and big man jumps out from behind the corner. Girl screams, man attacks, girl has no way to defend herself. The attacker has accomplished his mission and the girl is more or less out of luck. What would you do in that situation? Do you know? Have you thought about how to defend yourself? If not, maybe you should start.

Senior Shawna Baker has been studying Tae Kwan Do for eight years and recently gave me some tips for defending yourself against an attacker.

One thing to always remember when defending yourself is to stay light on your feet. If you stay planted to the ground, you won’t be nearly as quick to dodge a punch or a kick as you would on the balls of your feet. Always keep a low fighting stance. It’s also important to protect both your face and stomach area as much as possible.

A first instinct might be to lay a punch or two. Don’t punch your attacker’s face. The face is made up of so many bones and unless you’ve been trained on how to pack a proper punch, it’s very probable that you’ll injure your hand in some way. If you really feel it necessary to punch, go for the stomach area. There are a lot of organs that aren’t going to enjoy your fist.

A common myth is that if you go for the groin, your attacker will pretty much be down for the count. However, it’s likely that your attacker will be expecting you to act this way and therefore, will be protecting themselves. This is why it’s important to learn other forms of defense besides the good old “kick ’em where it hurts” routine.

Say your attacker is coming at your throat and has a strong hold. Have no fear. There’s a way to get out of this sticky situation. Simply clinch both your fists, come over your attacker’s arms and come down with force over their elbow area with your fists. This will result in your attacker releasing their grip.

If you want to get fancy and show off your kicking skills, go for the kneecaps and outer thighs. If you kick their kneecap hard enough, you may push the kneecap into their muscle, which would most likely not feel too well. If you really want to show them who’s boss, kick one kneecap with your opposite leg. Take your other leg and kick the outside of their upper thigh. Baker knows the effectiveness of this move.

“This will create a pain that will make them want to vomit,” Baker said.

If your attacker is coming at you from behind and has you in a WWE-type choke hold, try to remain calm. There’s a clever way to get out of this as well. When your attacker has their arm around your neck, dig your chin into their elbow and bend your knees. Then, push up as hard as possible and flip them over the shoulder that is being covered by their arm. Now they’re on the ground and you look a lot tougher than they might have anticipated. Good for you!

You might be thinking that there’s no way you’ll remember the steps to successfully take down your attacker in the heat of the moment. That’s OK. There are pressure points on the body that, if hit, are bound to get the job done without any tricky moves involved.

The part of the neck right above the sternum is a very good pressure point to hit. It’s where your trachea is located. Hit your attacker there and it’s a sure bet that they’ll be in some pain.

Another very effective pressure point is the nose. If you hit the nose properly (and with a lot of force), it’s possible that the cartilage bones will be forced up into the brain, which in turn would kill your attacker. Hit with the very bottom part of your palm, close to your wrist and you’ll give your attacker a nice run for their money. Good luck and happy defending!