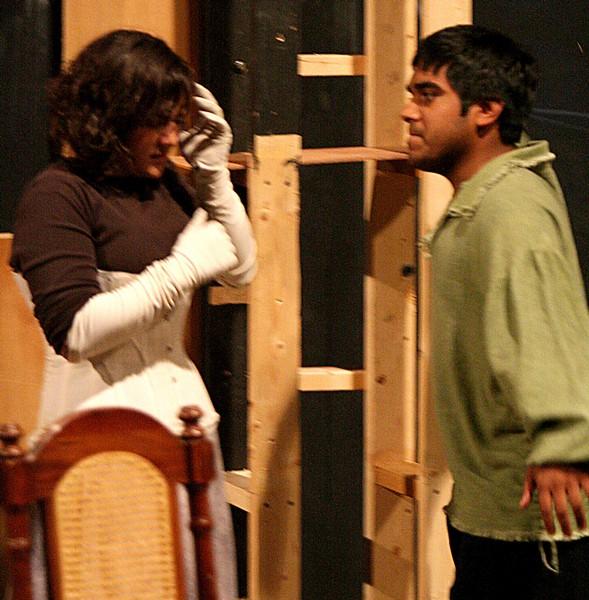 Haunting, captivating and shocking are three words that Jennifer Ross Nostrala, professor of theatre arts and head of the Division of Visual and Performing Arts, would use to describe the upcoming play “One Flea Spare.”

“They (students) should expect to see an engaging story that will sometimes be startling,” Nostrala, the director, said.

The cast for the play is small, with senior Travis Cherniss, juniors Jonathan Feld and Mackenzie Webb and freshmen Kathryn Lisk and Patrick Stamatelos making up the dynamic cast.

“One Flea Spare” takes place in the midst of the Bubonic plague in London during the summer of 1665.

“This play is a haunting comedy,” Feld said.

Though written in 1995 by Naomi Wallace, the play deals with issues still relevant today, including gender roles and social class.

“This play relates well to all time periods,” Feld said. “It really dives into the human condition.”

The Snelgrave couple is quarantined in their house for 28 days as a result of household servants dying from the plague. A guard is placed outside of the home to make sure the couple doesn’t leave the house.

When the guard notices two people have broken into the house, a 12-year-old girl and a sailor, all four are quarantined for 28 more days.

These four people come from different walks of life, which inevitably leads to conflict.

“I think it is a play that will leave the audience with several things to think about when they leave,” Webb said.

The performances are free for students, but seating is reserved. Tickets can be picked up in the BSC or theatre box office.

“It’s a great piece of work that is unique from what students would typically be able to see,” Webb said.