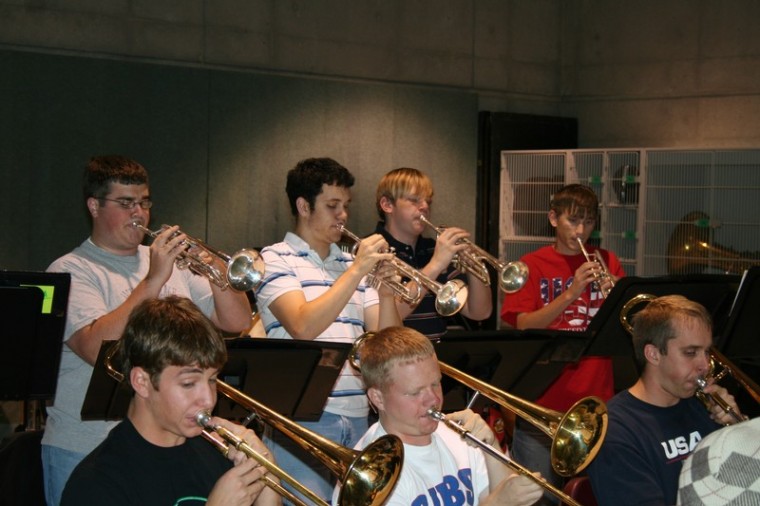 Simpson College has always been known for the great music program offered on campus and this year is no different. According to Dave Camwell, instructor of saxophone and jazz studies, 10 percent of the incoming class is music majors and there are currently over 100 music majors at Simpson.

To be involved in the Simpson College Jazz Band, students go through a typical audition process.

“We have auditions every fall during the first couple weeks of school,” said senior Paige Webb, who plays baritone saxophone. “Each person has to play a section of music that our director picks out and sight-read a small section of another piece.”

This year, there was such a high amount of students who wanted to participate in the jazz band that some had to be turned away.

“I’m hoping to have two bands in the future,” Camwell said.

The Honor Jazz Band consists of high school sophomores, juniors and seniors that are nominated by their directors.

For something like the concert that took place Nov. 7, the students participating spend a lot of time practicing. According to Camwell, being a music major keeps students pretty busy as it is. When it comes time for a concert, there’s even more practice involved.

“Several hours go into preparing for something like this,” said freshman Katherine Simpson, second alto saxophone. “The jazz band rehearses for an hour and a half every Tuesday and Thursday, plus each section of the jazz band has an hour sectional to work on specific sections of music.”

Webb understands the importance of practice as well.

“We practice a lot for jazz band anyway,” Webb said. “Performing before an audience of jazz musicians, we want to sound even better so we practice more.”

The high school students chosen for the honor band have a wonderful talent when it comes to playing an instrument. They are able to perform music that they may not be familiar with.

“It will be interesting to see how the honor band does,” Camwell said. “They receive the music that morning of the concert.”

Students can expect a great performance and an exciting time if they choose to attend the concert.

“I don’t like to choose boring music,” Camwell said. “People who attend aren’t going to be bored. The jazz band is sounding good and is the strongest band since I’ve been here.”

Jazz band members are also excited about the selections they will be performing and are optimistic about the outcome of the performance.

“We are playing some great music for this concert and I think it will be fun and enjoyable for all of us,” Webb said. “I think we are better prepared than we would have been last year. I think we are all ready to perform.”

Simpson has much of the same thoughts.

“I feel the concert will go well because of all of the time that has gone into it,” Simpson said. “The members of the jazz band have worked hard and I feel that Simpson will put on a good performance.”