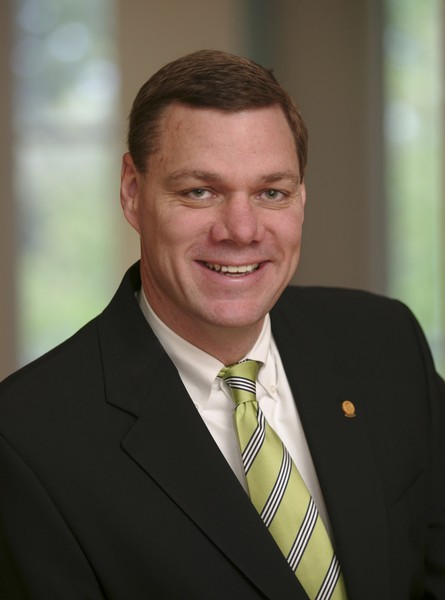 by Shara TibkenEditor in Chief

Lane will be joining Simpson Jan. 2, 2007, as the fourth vice president of college advancement in four years.

“Hopefully I’ll offer some stability as well as some leadership and some familiarity with the alumni base and local community,” Lane said. “Having lived there for such a long time, I think I might have a unique perspective that someone who was coming in from the outside who had never lived there before and never knew much about Simpson wouldn’t have.”

Chris Goodale was the most recent vice president of college advancement. He took the position of senior advancement officer during the summer.

“We wanted to organize the talent within our advancement office to best achieve our goals,” Byrd said. “Chris brings a lot of experience in his career in working with major donors. One of the ways we thought we could best use his talent was focusing his energies on the campaign.”

As vice president of college advancement, Lane will oversee the various areas of alumni relations, the annual fund and Simpson’s fundraising campaign. Lane brings with him experience in major campaign fundraising.

“He’s almost the perfect choice,” said John Epperson, professor of political science. “You’ve got to really get people hooked into the vision and direction of the college and get them interested, and I think Bob can do that. He has a long experience in doing that. From our point, another thing he brings to the table is that he knows the institution. He has a history here. He knows Simpson, and he loves Simpson.”

Lane most recently served as the vice president for advancement at Illinois College for 11 years.

While at Illinois College, Lane participated in a fundraising campaign that raised money to build new facilities on campus, much like Simpson is trying to do for its proposed student center. The buildings Illinois College wanted to construct were a science building and a fitness center.

“It was a $30 million, five-year campaign, and two and one-half years into the campaign, we had already reached our goal,” Lane said. “It was a lot of hard work, but you also have to have some good luck to be successful. The board of trustees approved raising the goal to $40 million.”

Illinois College ended up raising $42.5 million in its campaign. Along with building new facilities, the funds were also used to create scholarships, provide research and travel funds, improve technology and increase the endowment.

Though he enjoyed his time in Illinois, Lane feels lucky to be returning to Simpson.

“I’ve always had a soft spot in my heart for Simpson for a lot of reasons,” Lane said. “One, it truly is a place Becky and I call home, having gone to school there and working there for such a long time. I think the college seems to be on a roll right now, and Dr. Byrd’s enthusiasm seems to be infectious.”

Lane has many connections with Simpson, including previously working at the college.

While a student at Simpson, Lane was a physical education major, Lambda Chi Alpha member and Storm football player. He worked in Simpson Admissions for two and one-half years following his graduation in 1981 and also met his wife, Becky, while a student.

“I’ve known Bob since he was a student here,” Epperson said. “I’m a big fan of Bob Lane. He’s always been one of those people who got the job done. He’s just a great person.”

Lane went on to work in sales management at PepsiCo, Inc. for a year in Phoenix before returning to Simpson in 1985, working in college advancement as a plan giving officer and then as a major gifts officer in development.

“He really got his start at fundraising here,” Byrd said. “As a result, he knows a lot of alums. He knows a good many of our trustees. He actually worked with them in his fundraising role here early in his career.”

Lane left Simpson to work at Cornell College from 1993 to 1995 as executive director of development, and from there he went to Illinois College before finally returning to Simpson.

The couple has a daughter, Allison, a freshman at Simpson this year, and their son, Ryan, is a high school sophomore.

“We have a terrific new vice president,” Byrd said. “I’m very excited about him joining Simpson, and I know he’s going to do a great job.”