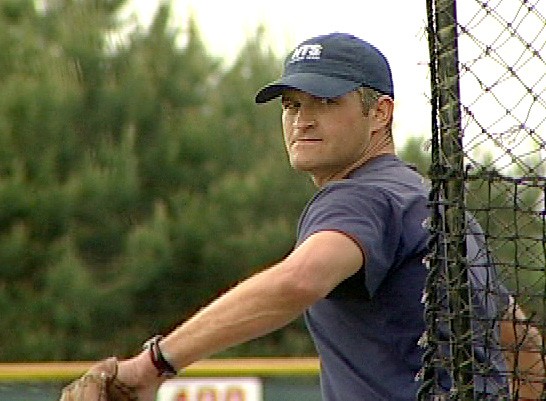 Simpson’s baseball program will be led by a different face this year as Ben Blake takes over as the new head baseball coach.

Blake has a lot of experience both coaching and playing baseball. He played at a Texas A&M, Simpson and in the minor leagues of the Cleveland Indians. His coaching experience includes a year at DMACC and three years under former baseball coach John Sirianni, with two of those years as assistant coach and one year as associate head coach.

Senior captain A.J. Wieck said Blake has been at Simpson for so long that the change was seamless.

“We’re used to him,” Wieck said. “It’s just been business as usual.”

Volunteer Assistant Coach Jeff Martens, said Blake is a good candidate for the position of Head Coach because of his commitment to Simpson College.

“[Blake] is a dedicated person to teaching the game of baseball,” Martens said. “And he is really dedicated to the Simpson family.”

Blake said he hopes to share his experiences with Simpson players in order to make each individual better. He has gained knowledge throughout his career and hopes to show the different skill levels.

“I offer the kids an opportunity to see how the big-leaguers do it,” Blake said.

Martens said Blake brings a lot to the Simpson program.

“[He brings] an energy level and a passion for the game,” Martens said, “as well as a large knowledge base from his past experiences.”

The baseball team was 26-10 last season and Blake said he isn’t setting specific goals for this season, except to see improvement in his players.

“My goal is always the same,” Blake said. “(I want) to take each kid and make them into good ball players. If each kid plays as well as he can, we should be successful.”

Wieck said this year the team is going to focus on working hard and building team chemistry. As a senior, Wieck feels pressure to help new players feel welcome.

Wieck said it is his job to lead out-of-practice workouts and make sure everyone is included. Blake said during the off-season the coaches are not allowed to be too involved in training, but each player will be involved in strength and conditioning, as well as speed and agility. They will also be in hitting groups and occasionally view films to see where improvements can be made.

Blake said his fellow coaching staff helped to make the team even better.

“I am surrounded by good coaches,” Blake said. “We have a solid staff, which helps kids have one-on-one sessions with coaches.”

Wieck said he couldn’t think of anyone better for the job, and Martens agreed.

“Blake will continue the traditions of the Simpson baseball program,” Martens said. “He will work to make it an elite program within our conference.”