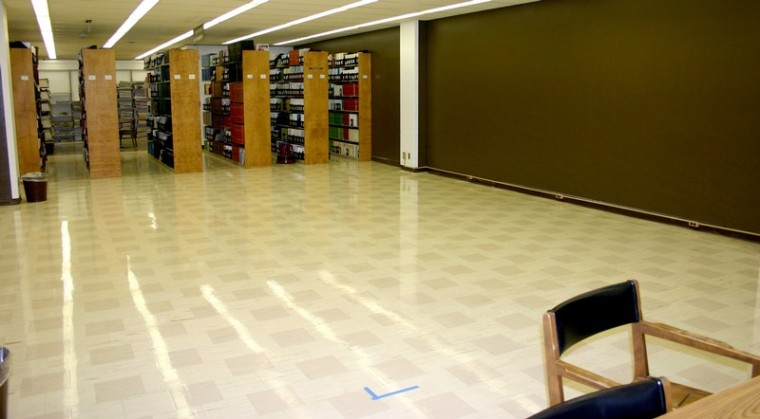 Changes are in store for the first floor of Dunn Library.

Plans have been put into action to construct two rooms to fill the empty space in the back of the library. The rooms will be used for administrator offices in the short term, but the college plans to use the areas for student study spaces in the long term.

The space that the rooms will occupy was once home to the library’s large collection of music records, as well as study corrals and listening stations. A majority of the library’s records have been moved to the music library in the Amy Robertson Music Center, and the more popular records have been put in the back to make room for the new addition. The study corrals were also removed, and the leftover chairs and tables were dispersed to new locations.

The idea for the new rooms stemmed from the ideas of Cyd Dyer, college librarian and archivist.

“One of my dreams was to have group studies back here,” Dyer said. “My hope is that students will be able to come back here with a group to work on a presentation for a class, work on a PowerPoint or study for a test. That way you’re not in the middle of the library where everyone else can hear you.”

Dyer shared her dream with Steve Griffith, vice president for academic affairs and academic dean, while giving him a tour earlier this year. Griffith later approached Dyer later with the idea for the new rooms to be used as office space.

Griffith considers the library a good place for the new offices.

“It was solving two problems at once,” he said. “In the short term, we’re solving the office problem, and in the long term, we’re providing students with new study rooms.”

After the rooms are completed, they will serve as temporary offices for two new positions on campus: Administrative Assistant for Faculty Development Curriculum and May Term, and a part-time International Studies Coordinator.

Griffith believes it will be handy having these two offices in the library because students interested in international study programs will have the offices right there, and faculty will also have easy access to the offices as well.

Ideally these rooms will serve as offices for only a year or two, and Dyer looks forward to when they can become study rooms.

“One thing I’ve always tried is to keep offices out of the library,” Dyer said. “I want these to be for the students.”

The funding for the new changes to the library will come from the building and repairs budget, and according to Dyer, will cost approximately $20,000.

Construction on the rooms will begin Dec. 15 and should be done by Dec. 22. However, work will have to be done to get air conditioning and heat in the rooms. They have have to connect the rooms to phone lines, the internet and electricity, which will take another couple weeks.

The rooms will be 12 by 15 feet, and the walls will be constructed of glass and look much like the current walls on the east side of the library. The wall between the two rooms will also be made of glass but be tinted to provide the occupants with a bit more privacy.

Dyer looks forward to having the rooms because they will provide a safer study environment.

“Before we had rooms upstairs that were all closed off and they weren’t very safe,” Dyer said. “With the new glass walls, you’ll still be able to see, and it will be a lot safer.”

The new rooms will also provide students a quiet room to work in when the classrooms on the upper level of Dunn Library are booked.

“It’d be cool to go somewhere in the library and not disturb anyone,” she said.