Christian artist to perform at Simpson 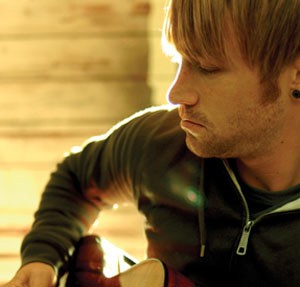 by Shara TibkenEditor In Chief

McDonald, a folk-style Christian artist based in Seattle, Wash. will be performing from 8 to 10 p.m. in the BSC gallery.

“His music is acoustic,” said sophomore Annette Scholten, an organizer of the concert. “He has a unique rhythm, which is what sets him apart from other artists and what I like about him.

McDonald played at Simpson two years ago to a crowd of 340 people. That performance was also hosted by the Christian Concert Committee, a part of the Religious Life Community.

The committee planned to host a large concert featuring many bands in the spring of 2007, but when McDonald contacted Simpson about his tour passing through the area, the committee couldn’t resist booking his act.

“Shawn McDonald has grown since he had the last Simpson concert,” said junior Benay Hicks, RLC student chaplain of service. “He wasn’t as big a Christian artist as he is now. He changed the way his music sounds. He now has more depth and passion. He’s a growing Christian artist, and as he’s continuing to grow, we see good changes in him.”

Kramme believes McDonald has a lot of appeal for college students.

“The heart of his story, about how he came to Christ, was in his college years,” Kramme said. “He was dealing with a lot of things we’re dealing with: image problems, drug problems and faith problems in general, the image society had given him. His style of music is based on that, and it gives meaning to us. We can attach ourselves to it. Not only that, he’s really good. He’s a great musician.”

Alli Rogers, another Christian acoustic guitar player and singer, will be opening for McDonald.

“She has the same kind of style – folk singer,” Kramme said. “It’s just her and a guitar. She sounds a lot like Allison Krauss.”

Tickets to the concert for students are free and don’t have to be purchased ahead of time. Students just have to show their Simpson IDs to be admitted into the performance.

The Christian Concert Committee expects a turnout of between 150 to 300 attendees. The event was not publicized outside Simpson as much as previous concerts because it came together within the last month. Tickets are available online, though.

Senior Krista Guillaume is one Simpson student who plans to attend the concert.

“He’s a pretty big name in the music industry and a big name in the Christian artist industry, and we don’t usually get big names here,” Guillaume said. “He’s really good. I really enjoy his style. He did play an acoustic set when he was last here, but this time he’s having a full band.”