Brrrrr, it’s cold out there 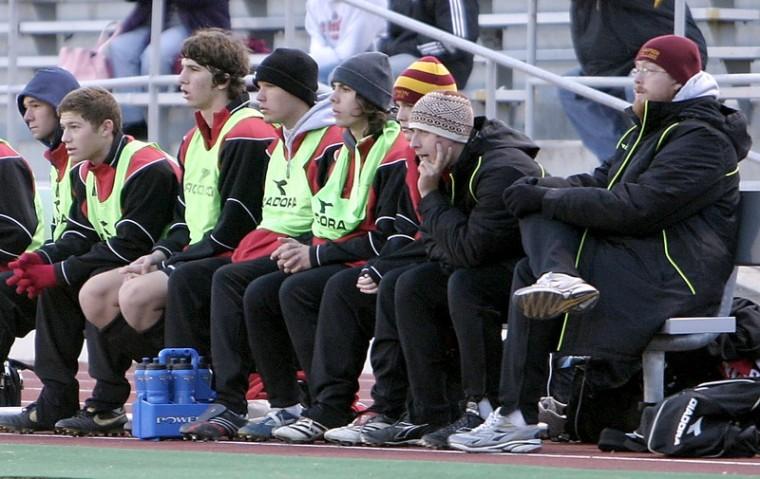 As all the fall sports dwindle down to the end of another year, the weather is dropping as well.

Football and soccer still have games and practices in the low temperatures, so players have to adjust to the chill.

Mike Wilson, Simpson’s head men’s soccer coach, said it’s easier for him to stand out in the cold with a heavy jacket on and all bundled up, but the players on his team have a harder time staying warm at practice.

Wilson doesn’t see the cold weather as a problem, though.

“Since it’s cold and the practices are shorter and to-the-point, the players are more focused and tuned in,” Wilson said.

According to Wilson, he never cancels practice unless there’s lightening or other extreme factors. He said practice is mandatory, so all the players have no choice, otherwise they don’t play and they’re off the team. He tries to keep all the players active and feels they are excited to play.

“I try to utilize every guy in practices, and during a game I encourage the bench players to get up about every five to 10 minutes to keep active, and eventually I use every guy,” Wilson said.

Wilson said the only negative issue with the cold is the players might be a little rusty at the beginning of the game.

“I’d have to say it takes the players longer to get rolling as a team,” Wilson said.

“My hands get really cold and I can’t even feel them at the end of a game,” Schlatter said.

There are some negative aspects about playing in cold weather.

“In cold weather you will have to worry about hypothermia, frost nip, frostbite and musculoskeletal injuries,” said Assistant Athletic Trainer Rhonda Cross, athletic trainer for men and women’s soccer and men’s basketball. “Those athletes that are sitting on the sides waiting to play need to keep warm. They also may have cold muscles, and if they do not warm up sufficiently, it could make them more prone to muscle strains.”

According to Cross, none of her athletes have had problems playing in the cold.

“A few have had strains, but I cannot say if they were related to cold weather,” Cross said.

“It makes me better, because I’m more concentrated on the game,” Schlatter said.

Athletes who don’t play as much as others must find ways to stay warm while on the sidelines.

“Last game it was cold out, and we shuffled around cones,” Schlatter said. “I also go for a jog when I want to keep warm and stretched out, ready to enter a game.”

Golf season just ended as well, and according to freshmen Katie Vaux, they play golf the same way no matter what the temperature is. She said the weather still affects the team even though the season ended Oct. 6 because they still go out and practice.

“No matter how cold it is, if you’re dedicated to the sport, you will still get better no matter what,” Vaux said.

The cold weather makes playing golf more difficult than during warmer temperatures golfers are used to.

“If it is cold, I wouldn’t be able to play to my full capability,” Vaux said. “The ball doesn’t go as far. Most of golf is mental in order to play to your standards and goals.”

Athletes playing in the cold are encouraged to take steps to keep themselves warm.

“Dress in multiple layeres, drink plenty of fluids, warm up, stretch and cool down,” Cross said. “Athletes waiting to play should continuously warm up on the sidelines.”