Volleyball wins first round of NCAA Regional Tournamnet, eliminated in second round 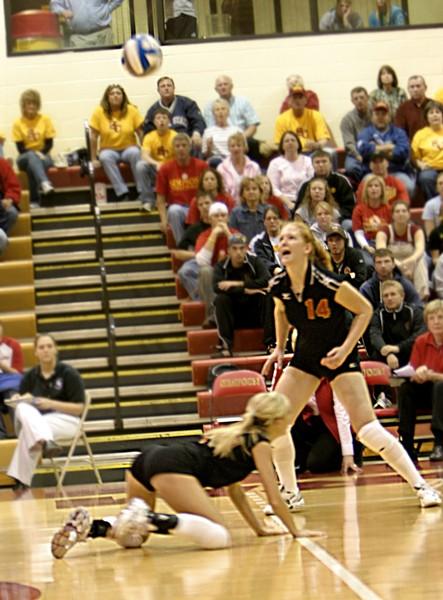 The Storm’s participation was a landmark in a number of ways. The appearance was the first since 1997.

Furthermore, the Storm’s well-deserved second seed in the Central Region was the best ranking the team has ever earned.

In the end it didn’t seem like the Storm had any problems meshing as the team easily defeated its first opponent, Maryville College from Tennessee, 3-1.

“We were focused and really buckled down on what we need(ed) to do,” Christensen said.

During the semifinals, however, the Storm couldn’t quite hold on to a two-game advantage and lost 2-3 to Rhodes College.

Everyone played hard, but when Rhodes stepped up its game, Simpson didn’t respond. Rhodes was aggressive in all aspects, and the Storm could not finish.

The team had no doubt early in the season that it had the potential to do great things this year, but it was a matter of putting it all together. Senior Tiffany Everding, outside hitter for the Storm, explained the necessity of the team’s ability to work together.

“It’s not hard to have six individuals with the talent and the potential,” Everding said. “But you must learn to play well as a team.”

Junior Erika Amfahr, outside hitter for the Storm, agrees that the team’s successes were the result of a variety of elements coming together.

“We knew we had the potential, but we didn’t know if we would mesh, especially when we lost some games later in the season that we should have won,” Amfahr said.

The presence of three freshmen could have been a major problem for the Storm, but it turned out to work well. Freshmen Tara Christensen, setter for the Storm, said that everyone felt relatively comfortable playing at the tournament because they were confident that their ability was greater than that of their opponents.

“Even in the match we lost, we were the better team,” Christensen said.

Coaches and upperclassmen were extremely impressed with the way the underclassmen handled themselves. Head Coach Lana Smith believes the freshmen were a big part of the success the team earned this season.

“They are all true competitors who aren’t rattled by competition,” Smith said.

Everding agreed the dedication of the younger players was evident during their last game.

“A loss meant the end of our career and only an end to their season,” Everding said. “But they wanted to win just as bad as we did.”

The Storm was lead by three seniors who showed great leadership throughout the season and especially at Nationals. In particular, Smith noted that senior Janay Michel, a middle hitter who transferred from a junior college last year, really stepped up.

“Janay was a great surprise,” Smith said. “She became a varsity starter and handled it with lot of poise. I feel like I should get two more years with her.”

While she knows her team had the ability to win the match, Smith was extremely proud of how her team played regardless of the final outcome.

“The girls responded to everything we threw at them all season long,” Smith said. “I am proud of their accomplishments.”

All of the girls felt as if they played as hard as they could on that given day. Everding feels sure that, “we left it all on the court.”

In addition, two Storm athletes were recognized by the Central Region for their outstanding play throughout the season and tournament. Senior Jess Martin, middle hitter for the Storm, was named Honorable Mention All-Region. Smith was impressed with the way Martin developed over the course of her four years at Simpson and her natural ability to see the court.

Everding also made an impact at the National Tournament. After being named MVP of the Iowa Conference, Everding was named First Team All-Region and Second Team All-American.

“Tiffany just got better and better every year.” Smith.”This was definitely a banner year for her.”