Students rally to support St. Jude’s Hospital through Up ’til Dawn 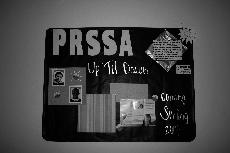 The patron saint of lost causes, St. Jude, is known as the saint one prays to when all hope is lost. After Liam, a four-year-old from Ames, was diagnosed with Myelodysplastic Syndrome, it seemed to every doctor his family should give up hope.

His disease had a 75 percent rate of relapse, with survival depending entirely on a bone marrow transplant. Nevertheless, the family turned to St. Jude’s Children Research Hospital as the only place that could help him. Little did they know that in two years, 250 students just 50 miles away would be fighting for his survival.

On Jan. 30, about 250 Simpson students will gather together to write letters to friends and family in hopes of receiving donations to help kids like Liam all over the world. Students will participate in the nation-wide program, Up ’til Dawn, which has set a goal to raise $72,000 for St. Jude’s.

Going by the motto, “Cancer doesn’t sleep, so neither will we,” and propelled by pledges, the participants will stay up all night March 25 to recreate the effects of cancer on families. Movies, games, food and bands will be the entertainment for the evening.

Sara Heim, executive director of the program, says the cause is one that brings the campus together.

“What better cause is there than saving kids with cancer?” she said. “That’s the kind of the mentality that we have. We’re only asking for an hour and a half of students’ time to make a huge amount of difference for these kids.”

Local businesses have donated to the cause as well. Senior Gwendolyn Dickmann is donating jewelry from her company, Rococo Designs.

“I just think that it’s a very good cause. I have donated to other events in the Des Moines area such as a child abuse event, and I just feel that it’s important to be able to give back,” Dickmann said.

While the event inspired donations from businesses, it has also created a genuine passion from students. Junior Alison Jepsen says the cause is something everyone has a tie to.

“Cancer affects everyone at some point,” she said. “It’s not so far away from us. Everyone knows someone who has or had cancer, whether it be a friend or a family member. The Simpson community can really come together around this cause.”

Now in its eighth year, the program has raised $25 million at colleges across the country, including St. Ambrose and Coe College. While these donations have been wonderful for the hospital, St. Jude’s always needs more, spending $1 million a day treating every child who walks through their doors.

“I’ve been amazed at how many students (Simpson has) recruited so far. It’s just wonderful,” Simon said.

Heim encourages anyone who still wants to sign up to respond to e-mails or come to the sign-up booth at basketball games. With just six more people, Simpson can become the first college to meet its goal within the first year.

Junior Laura Hersom, a member of the Simpson College Democrats team, agrees it is an event Simpson can be proud of.

“I had classmates in high school with cancer. I remember talking with them about what St. Jude’s had done for them. It’s just a great way for Simpson to act as a community.”

When Liam first came to St. Jude’s, his family had been told he probably wouldn’t survive. Now, after undergoing a bone-marrow transplant and chemotherapy, Liam has a renewed chance at life. He even is starting to have his own dreams of going to college.