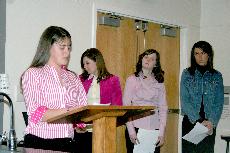 What potential benefits and conflicts would possibly arise if Simpson College decided to put a bar inside the proposed student center?

This is only a small example of one of the final questions given to the remaining four teams in the final round of this year’s Ethics Bowl that took place last week. Sponsored by Students In Free Enterprise, the competition challenged 14 teams to apply ethics to different situations that could be encountered in life.

Senior Andy Schmidt was instrumental in organizing the event in its second year.

“The idea is just to promote the idea of ethics,” Schmidt said. “There are many classes now in which ethics could be included, but aren’t currently.”

Some adjustments were made to the program in hopes of improving from the previous year. Teams were allowed to listen to other groups’ presentations, and the event was split into two days.

The questions for each round were written by the departments and approved by President John Byrd. Another change this year is that the teams didn’t have questions from their own departments. The physical education team, for example, might answer an ethical question from the English department.

The teams were given an ethical dilemma to which they had to present a solution to a panel of three judges.

Friedrich, who also served as a judge in the first year of the program, found it interesting the competition on ethics is sponsored by the business department.

In the end, the philosophy team earned first place for the second year in a row, taking away the $400 prize and a team trophy. The prizes were funded by SGA, and each of the final four teams was presented with a plaque engraved with the team members’ names that will hang in its respective hallway.

Several efforts were made to make the event more appealing across campus. CAB provided door prizes for a drawing that anyone could be eligible for by attending two of the three rounds.

“I think it’s a really great event,” said senior Rachel Orris, one of the SIFE members responsible for planning the event. “In the future we hope to have other colleges compete against championship teams and even develop a high school version.”

All involved are optimistic about the future of the Ethics Bowl.

Friedrich believes it gets the entire campus involved in a common purpose.

“It really engages every faculty and student on campus,” Friedrich said. “I’d do it again in a heartbeat.”