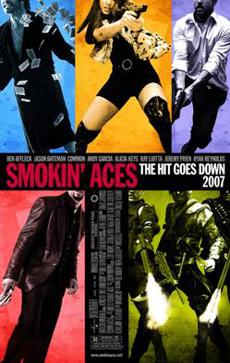 Joe Carnahan, director of “Narc,” brings to us his latest film, “Smokin’ Aces,” the story of Buddy ‘Aces’ Israel – Jeremy Piven, HBO’s “Entourage” – a Las Vegas performer who decided to turn the state’s evidence against the Las Vegas mob.

When a $1 million contract is taken out on Israel’s head by mob boss, Primo Sparazza, the FBI places Israel into protective custody under the supervision of two agents played by Ryan Reynolds, “Van Wilder,” and Ray Liotta,”Goodfellas.” The hefty price tag on Israel’s head spreads through the community made up of convicts, bounty hunters, mobsters and vixens and drags everyone into a race to the finish line where the winner takes all.

Filled with top-notch actors, “Smokin’ Aces” is high-octane entertainment with some comedic one-liners throughout. However, if you’re going to see this movie, be prepared to stay focused and pay attention. The complex story line and introduction of new character after new character makes it almost impossible to leave your seat for a quick bathroom break.

Because of the importance of each individual character, the first hour or so of the film tends to get a little long with the introductions and the attempt to connect each character with one another and Israel.

Though the movie starts out a little slow with the development of each character’s story line, the second half of the film picks up the pace and is quite entertaining. The story lines makes it a very thought provoking and entertaining film, which drags the audience in and keeps them focused from start to finish.

The movie is stylish and clever, and with solid performances from everyone, “Smokin’ Aces” is your typical, no-holds-barred gangster thriller, filled with series of bloodbath showdowns.

The long list of popular entertainers gives “Smokin’ Aces” an all-star cast. Piven does a great job as the main character and the group of supporting actors is what really makes the film work.

Alicia Keys does a wonderful job playing something other than a piano. Her role as Georgia Sykes gives her some street credibility as a powerful and sexy woman, and pulls you away from knowing her only as a soulful singer.

Rap artist Common also makes his film debut and only adds to the film. Performances by Ben Affleck, Jason Bateman and Andy Garcia gives “Smokin’ Aces” an all around superb cast with excellent performances.

Being that it is your typical gangster movie with strong, bloody violence, explicit language, some nudity and drug use, it gets the obvious R rating.

If you’re looking for stylish entertainment with fantastic performances and an unexpected twist, “Smokin’ Aces” is what you want to see. Strap yourself in and enjoy the ride.

The film is showing at Century Theatres in the Jordan Creek Town Center, as well as at Carmike Southridge 12. Unfortunately, Indianola is not showing the film so you’ll have to dig through the couch cushions to find a little extra change for tickets and gas money.